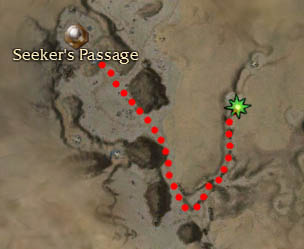 "Forgive me if I seem startled, but it has been ages since a living being has spoken to me... Please, don't think less of me, but I have a rather selfish request of you. When the...event...that destroyed my people occurred, I was supposed to meet my betrothed Chebar out in the Salt Flats near one of those curious teleportation pads. We thought it was a perfect place to be alone. It has been my single lasting torment that I never found out what happened to Chebar. Although it is unlikely that any sign of his...remains...would have survived to this day, I would like to be certain.

Would you go to the Salt Flats and see if you can find any sign of Chebar?"

Starting from Seeker's Passage, go southeast until you go through a narrow channel, then round the wall to your left and up another narrow channel with wooden plank steps and platforms. You will reach Chebar, the objective of this quest, at the top of the channel beside the teleporter.

If you are also doing Ancient Secrets, continue by teleporting, then move in a northeasterly direction until you find Sennat Sen, the objective for Ancient Secrets.

You need to take it slowly. You will encounter Rockshot Devourers, Jade Scarabs and a pretty large number of Storm Kin. The Storm Kin patrol in small groups but can move very quickly along their patrol routes, so it is easy to aggro more than you would like. They also seem to aggro from farther than your aggro circle, so be careful to deal with these in as small numbers at a time as possible, and heal up and recharge between encounters.

Note: It is possible to simply run to Chebar, even without a running skill, going headlong through the groups of enemies. Hire a full party of henchmen and let them serve as distractions. Assuming you don't trigger any traps, the most dangerous thing you'll face is constant Health degeneration from Conjure Phantasm and Parasitic Bond, but this is unlikely to be fatal as the run is not a very long distance. If you choose to bring a self-healing skill, be aware that the Rockshot Devourers use Distracting Shot.

Retrieved from "https://guildwars.fandom.com/wiki/A_Belated_Betrothal?oldid=1495818"
Community content is available under CC-BY-NC-SA unless otherwise noted.