Acolyte Jin is a Hero available in Guild Wars Nightfall. A quiet, deadly member of the Zaishen Order, Jin seeks a suitable teacher.

When Jin was a young girl growing up on the coast of Cantha, her family was slain by monstrous creatures in the dead of night. From that moment on, she trained as an archer, determined that the forces of darkness would never take her by surprise again. For hours, she silently practiced with her bow, taking some small measure of comfort in the sound of a bowstring releasing or the menace of an arrow in flight. Even before she joined the Zaishen Order, she was a determined and deadly adversary, and their instruction has made her even more dangerous.

Traveling with others makes her feel a little safer, but she considers the concept of "safety in numbers" a delusion. In the end, she knows it's her own skill that means the difference between life and death. She does not care about rank or status in the Zaishen Order. Each day she systematically eliminates another monster threatening Elona, she finds it a little easier to survive one more night of troubled sleep. 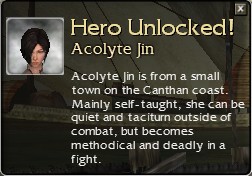 Complete the quest Student Jin. This quest is mutually exclusive with Student Sousuke, which leads to the recruitment of Acolyte Sousuke, and both are offered by Field General Hayao immediately after completing Zaishen Elite. Accepting Student Jin on a character will prevent that character from recruiting Acolyte Sousuke until the character completes the Nightfall campaign.

Any character that accepts Student Sousuke must instead complete the Nightfall campaign by finishing the Abaddon's Gate mission, then accept and complete the quest Gain Jin given by Acolyte Jin in the Throne of Secrets.

R indicates that Acolyte Jin must be in the party

Acolyte Jin starts with Ranger Zaishen armor, which has the appearance of undyed Ranger Shing Jea Armor, and a Zaishen mask as the headgear. Her armor has an armor rating of 25 to 70, depending on her level.

In Sun Docks, Plains of Jarin, and Zehlon Reach:

"My family was killed because they weren't prepared for danger. The Zaishen rescued me. I vowed to prepare myself for the perils of life and learned the ways of the bow from an early age. Lead me through danger and my arrows will darken the sky above your path."

"I told you once before: there is no danger so great that a courageous heart cannot overcome it"

The Time is Nigh:

Retrieved from "https://guildwars.fandom.com/wiki/Acolyte_Jin?oldid=1559473"
Community content is available under CC-BY-NC-SA unless otherwise noted.