Anton is a human assassin hero in Eye of the North. He is from Ascalon. He escaped from Death Row during the Searing and later joined the Ebon Vanguard. He is loyal to the Ebon Vanguard, but this may change if their leader is dead.

Anton has come far since his days as a prisoner in Surmia awaiting execution. While others curse the Charr, Anton privately blesses their invasion—without it, he would never have escaped Surmia and fled north. He survived for many years by raiding the Charr, eventually leading to his capture. Freed by Captain Langmar, he joined the Ebon Vanguard and now serves them as a scout, utilizing his Assassin skills—for once—for the betterment of more people than just himself.
Although he does not consider himself a brave individual, Anton does feel a certain amount of loyalty to the Ebon Vanguard, and has no plans to betray them. Should Captain Langmar die, of course, that situation could change quickly—and the last they will see of Anton is a sheathed blade vanishing into the darkness.

He can be seen watching The Norn Fighting Tournament as a spectator. He also makes an appearance in the cutscene after Assault on the Stronghold, as he is one of the soldiers saved from the Charr. He is with you as an ally in Sacnoth Valley during the quest The Assassin's Revenge. Also appears along with other prominent Vanguard NPC's at the end of Gwen's Bonus Mission Pack. He is visible as you run up to the Ascalon Foothills by holding alt, and he is in the back of the cutscene near the weapons rack facing away from the rest of the Ebon Vanguard. 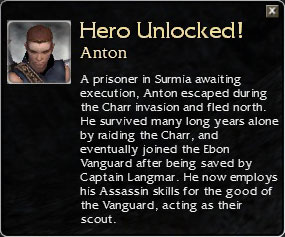 Complete the quest The Assassin's Revenge.

Retrieved from "https://guildwars.fandom.com/wiki/Anton?oldid=1559469"
Community content is available under CC-BY-NC-SA unless otherwise noted.