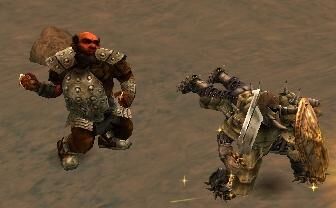 Dwarven Boxing (A.K.A. Brawling) is a mini-game introduced in Eye of the North. It takes place through a series of quests given by Kilroy Stonekin in Gunnar's Hold which allows you to fight a variety of different foes from all over Tyria, and explore Fronis Irontoe's Lair. If you don't already have one, Kilroy will give you a pair of Brass Knuckles that must be equipped before any brawling can be done.

These quests are all given by Kilroy Stonekin in Gunnar's Hold and are as follows:

The normal Skill Bar is replaced by 8 Brawling Skills:

Thunderfist's Brass Knuckles, from The Throwdown in a Norn Town given by Kilroy Stonekin;

Use your best anti-physical Armor, as it will be unaffected by the Brawling effect

Retrieved from "https://guildwars.fandom.com/wiki/Dwarven_Boxing?oldid=1591229"
Community content is available under CC-BY-NC-SA unless otherwise noted.