Etnaran Keys is a location where an Alliance Battle takes place.

It is out on the Jade Sea, and is the battleground map reached if the Kurzicks win enough battles at Saltspray Beach. The battleground consists, starting from the Kurzick base, of a beach and jade wave area, followed by a large island with a channel running through. The control points are roughly arranged in a hexagon between the bases, with a resurrect shrine in the middle. Each side in the alliance battle consists of three teams of four players (all three teams must be from the same faction) to create two squads of 12. The goal is to gain command of seven control points and by so doing, outscore your opponents. For further details regarding gameplay see the Alliance Battle page.

Players may not enter the opposing teams base as they are guarded by a invulnerable, stationary NPC named Base Defender.

This map gives an advantage to the Luxons, as the control points are closer to the Luxon base and offers an extra NPC for the 3 shrines closest to their base, Luxon players often get a head start capturing points. The Kurzicks are compensated for their disadvantage with an Underdog Bonus equal to 100% of their score, providing them with a total of 2 Faction per point scored.

At this map, the Kurzick-Luxon border has passed over 1 or more Jade Sea outposts. 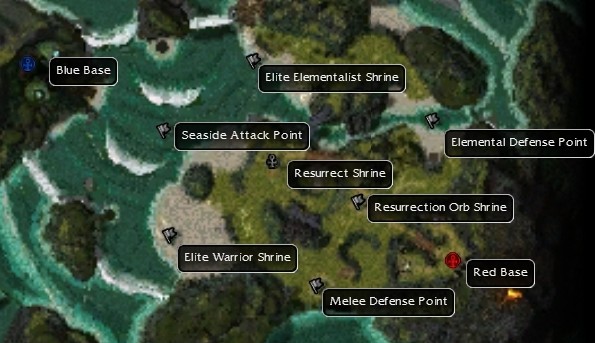 Retrieved from "https://guildwars.fandom.com/wiki/Etnaran_Keys?oldid=1417230"
Community content is available under CC-BY-NC-SA unless otherwise noted.