Nice and clean for how many minutes? Anyway, does our Wiki not support math or something?

So, it didn't, but it does now. -User:PanSola (talk to the

Not actually Prot from move anymore

It was protected in the past against move. Somehow the protection status was lost. Just want to note that down for the sake of record. I wouldn't bother re-protecting it against move unless it becomes a problem. -User:PanSola (talk to the

Not sure what this is for, but would like to say that I prefer one with the dotted path. Some areas are hard to navigate, especially(!) ones around Kaineng City, with multiple levels and paths that cross in X,Y but not in Z plane, and the dotted path makes it easier to figure out how to get there. RoseOfKali

allThe point was whether maps should be presented with the slideshow widget or static; since most objects have only one map, I think the static gallery is better than the slideshow. --◄mendel► 21:09, December 20, 2010 (UTC)

Hmm...
Add a photo to this gallery 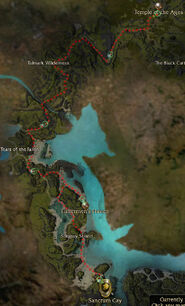 Yeah...
Add a photo to this gallery

Neat. Speaking of, I noticed that the 2 maps were truncated, revealing a problem with the gallery div tags: they don't do so well with images that are not exactly landscape or portrait aspect ratio. You can't see the whole image unless you click on it to bring up the pop-up. Is there a way to make them display the whole image, like the thumbnails do? If not, I guess there's always a way to simulate a gallery with thumbnails, if needed. RoseOfKali

As you found out, the cropping is determined by the "photo orientation" setting - it can be set to not crop at all, but then you also need to go to the second tab and set the caption to be positioned outside the image, or it'll cover up a fair bit of it. The best way to check this out is to click on "add a photo" which gives you access to all the settings for the gallery. --◄mendel► 16:34, December 22, 2010 (UTC)

Aha! Need to brush up on all the new feature thingamabobs... <_< RoseOfKali

Retrieved from "https://guildwars.fandom.com/wiki/GuildWars_Wiki_talk:Sandbox?oldid=1592634"
Community content is available under CC-BY-NC-SA unless otherwise noted.