Hayda is a human paragon hero in Eye of the North. She is a member of the Shining Blade.

Hayda is a young, vain, and impulsive Paragon who travels simply for the fun of it. Supremely confident in her abilities, she believes her position as a Paragon sets her apart from others. There is no situation so perilous where her innate charm, skill, and natural abilities will not carry the day.
Hayda joined the Shining Blade after the Mursaat were revealed as the “unseen gods” of the White Mantle, and she now dreams of becoming a legendary hero. She bridles against restrictions, particularly those set by Livia or Bartalos. Following their orders was necessary to gain permission to travel with them to the Tarnished Coast—and there's so much to be learned here. She will not let this opportunity pass no matter what her orders. 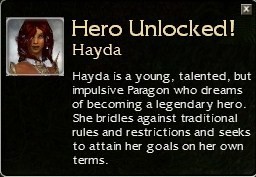 Complete the quest Give Peace a Chance.

See the armor gallery for details on her armor art.

When spoken to in Sparkfly Swamp:

"What do you want? Are you staring at me? You want some of this? Do you?"

When spoken to in Battledepths:

"I knew you could do it. I'd have said that even if you failed!"

Retrieved from "https://guildwars.fandom.com/wiki/Hayda?oldid=1559470"
Community content is available under CC-BY-NC-SA unless otherwise noted.