The Icy Dragon Sword (commonly abbreviated to "IDS"), like its cousin the Fiery Dragon Sword, is a popular sword that is prized for its style. It has a unique look, with its frosty blade (only two twisted "filaments" as a solid core) coming out of the dragon's mouth that acts as the hilt.

Icy Dragon Swords are blue by default and can not be salvaged for an Icy Sword Hilt with an Expert Salvage Kit.

Icy Dragon Swords always come with the same stats. However, they can be upgraded with a sword pommel to give them an additional bonus.

The Icy Dragon Sword can only be found as a drop from Ice Imps in the ice caves in the eastern part of Mineral Springs (see map below). Even then, such a drop is not guaranteed.

Note: Make sure none of the party members have Defend Droknar's Forge active on his or her Quest Log, because in this case the Ice Imps will not show up. 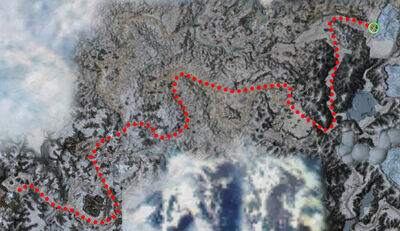 The only alternative is to buy the sword from a fellow player. To purchase this sword, the easiest place to find it on sale is in the Granite Citadel, which is the starting point for IDS farming runs.

Applying dye to an Icy Dragon Sword affects the hilt. Dyes cannot change the color of the flame.

Retrieved from "https://guildwars.fandom.com/wiki/Icy_Dragon_Sword?oldid=589403"
Community content is available under CC-BY-NC-SA unless otherwise noted.