Jora is a Norn warrior hero in Eye of the North. She is depicted on the cover art of GW:EN. She lost the ability to morph into a bear after an encounter with a dark power. She stayed at Far Shiverpeaks helping humans and Norn alike, hoping to redeem/prove herself and regain her powers.

Jora is a younger Norn, beset by tragedy. Like most of her generation, she has been seeking to establish her name and reputation. Only the hunters of the greatest prey are considered worthy among her people, and as such, she and her brother Svanir trekked through the icy uplands and valleys seeking the most challenging prey.
On one of their hunts, Jora and her brother encountered a great, dark power, and were transformed by it. She lost her Nornish ability to shapeshift into bear form, while her brother suffered a darker fate. Now without a family or homestead, she hunts across the Norn lands of the Far Shiverpeaks seeking redemption of her name and forgiveness by the Bear Spirit. To achieve her goals, she will undergo any ritual, achieve any quest, and seek any treasure needed. She will even accept the help of humans. 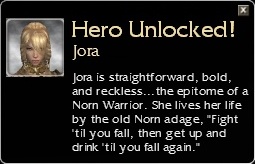 Complete the quest Curse of the Nornbear.

Jora has warrior armor labelled as a Norn set. Her headgear is hidden. Her armor has armor +20 (vs. physical damage) and an armor rating of 23 - 80 (depends on level). However, you will recruit her at level 20, therefore her armor rating is always 80.

See the armor gallery for details of her armors.

Retrieved from "https://guildwars.fandom.com/wiki/Jora?oldid=1613521"
Community content is available under CC-BY-NC-SA unless otherwise noted.