The Luxons and the Kurzicks are at war. If the alliance battle has reached the Kaanai Canyon, then the Kurzicks have driven the Luxons back to their holdout position. Extra defenses and familiarity give the Luxons a definite strategic advantage here, no matter how the greater war is going. Each side in the alliance battle consists of three teams of four players (all three teams must be from the same faction) to create two squads of 12. The goal is to gain command of seven control points and by so doing, outscore your opponents. For further details regarding gameplay see the Alliance Battle page.

The Luxons have a strong advantage on this map, the Kurzicks are compensated for their disadvantage with an Underdog Bonus equal to 200% of their score, providing them with a total of 3 Faction per point scored.

Players may enter the opposing teams base to cap the internal shrines, however the southern part is guarded by a invulnerable, stationary NPC named Base Defender.

When this map is being played in Alliance Battles, the Kurzick-Luxon border has passed over 4 or more Jade Sea outposts. 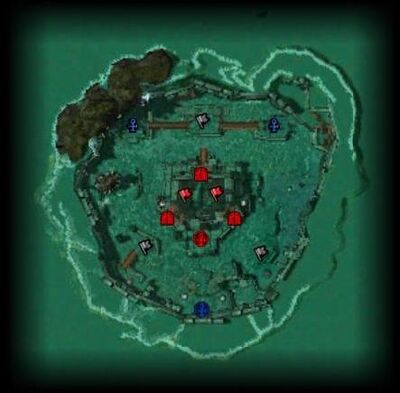 Retrieved from "https://guildwars.fandom.com/wiki/Kaanai_Canyon?oldid=1381408"
Community content is available under CC-BY-NC-SA unless otherwise noted.