This background lore related article is a stub. You can help by adding to it according to the style guide.

The "Kaineng Dragon" is suspected to be one of the Ancient Dragons that will be the main antagonists in Guild Wars 2. Nothing is known about this supposed dragon at this time, since there is no mention or hint of even the existence of this dragon in any of the official material about GW2.

The Kaineng Dragon can be found in Kaineng City, behind the resurrection shrine in Bejunkan Pier 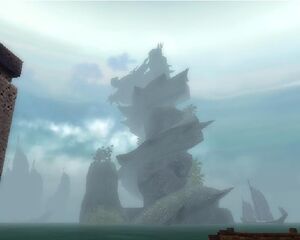 There is also a Dragons head imbedded in the planks of Sunjiang District , another possible dragon. However around Sunjiang district there other strange things protruding from the ground, so it may just be a quirk of the area.

Retrieved from "https://guildwars.fandom.com/wiki/Kaineng_Dragon?oldid=1314507"
Community content is available under CC-BY-NC-SA unless otherwise noted.