Running to the Hot Springs 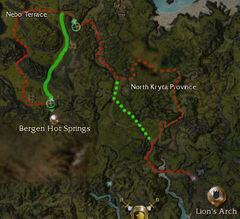 The difficulty of this run is very mild but may still be challenging to anyone not familiar with running through the heavy attack damage put out by Tengus.

Running to Temple of the Ages

In addition to an overabundance of Poison and Crippling (from Ghouls, Rangers, and Bowmasters) in the Cursed Lands, there may also be lots of Blinding being applied. Blind won't affect your running, but will however trigger Fragility damage in high frequency.

Right out of the gate, you'll be confronted by these condition spammers and a Necrid Horseman who can easily double the damage you receive from arrows if he hexes you with Barbs.

Before you even reach the entrance to the Cursed Lands, you will also encounter three fairly strong undead groups almost simultaneously. Raw speed and fast crippled-removal spells/shouts are your best allies against these groups. Once inside, the Cursed Lands offers two different paths to take. The first lower path (marked in Green) has no Ghouls, making it optimal for builds with sub-par solutions to Crippling, while the first upper path features a Horseman and several Ghouls, which presents a fairly deadly road-block given the fact that their Crippling Attack has no down-time.
After the two trails merge, those runners lacking proper Crippling removal should then follow the upper path (marked in Red) as there will be even more Ghouls near the end of the second lower path.

The foes in The Black Curtain will be much more spread-out but will also be higher in level. There is also a constant hazard from Poison being applied simply by stepping in the water there, which is not to be underestimated as it's a gradual but automatic removal of roughly 1/4 of your Health. The Barbs from the patrolling Horsemen can easily be ignored as there are no ranged foes that deal physical damage along that route, but their Desecrate Enchantments can still hit some builds very hard.

This is one of the easiest runs in the game, as long as you time your enchants/natural stride (if running on sin) right.

The most popular builds for running this run are listed below: (links go to PvX Wiki)

Retrieved from "https://guildwars.fandom.com/wiki/Lion%27s_Arch_to_Sanctum_Cay?oldid=1566933"
Community content is available under CC-BY-NC-SA unless otherwise noted.