Livia is a human necromancer hero in the Eye of the North expansion. She is a member of the Shining Blade.

"While the war between the White Mantle and the Shining Blade tears apart her Krytan homeland, Livia risks everything to keep her people safe. She joined the Shining Blade to protect them; she killed to defend them. Now freed from the control of the deadly Mursaat, Kryta struggles to survive, its leaders destroyed and its population beset by civil disorder.

Tasked by her superiors with finding a way to end the civil war, Livia has traveled into the Depths. She seeks a weapon of power—anything that will keep Kryta safe. And she is willing to give her life for it... as well as the lives of those around her." 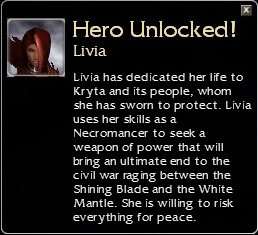 You recruit her by completing the "Finding Gadd" quest and its follow-up quest "Finding the Bloodstone".

Livia starts with basic Necromancer armor, labeled as Shining Blade Armor but with its own unique appearance. The headpiece provides +1 in the attribute of the rune applied to it. Her armor rating ranges from 3 to 60, depending on her level, but is effectively 60 as you acquire her at level 20.

See the armor gallery for details on her armor art.

Only as an ally during Finding Gadd and Finding the Bloodstone:

Warning: The following text contains spoilers relating to the plot of the Eye of the North expansion.

Retrieved from "https://guildwars.fandom.com/wiki/Livia?oldid=1591462"
Community content is available under CC-BY-NC-SA unless otherwise noted.