Melonni is one of the the Heroes (customizable party NPCs) available in Guild Wars Nightfall. She is a member of the Order of the Sunspears. A dedicated foe of the leaders of neighboring Kourna, Melonni has the annoying habit of always being right.

"You can push, but I will push back... only harder, much harder."

Melonni's a headstrong young woman from a small town in Kourna, an idealist who's become a thorn in Varesh Ossa's side. The villagers of her homeland will never forget her, and with good reason. Melonni antagonized Varesh so much that the entire region is now under the watchful eye of Kourna's militarized government. As for Melonni, she has no regrets, because she always does what she knows is right. She sees herself as a woman who fights for what she believes in... even when no one else around her agrees.

When she left in search of adventure — or more precisely, left to protect her home from Kournan reprisals — many citizens were hoping that she'd never return. Deep in her heart, she knows that her decisions will be proven right in the end. For some unfathomable reason, she seems to be very concerned whether Koss understands the importance of her values. Melonni is slowly learning to pick her fights a bit more carefully, largely through trial and error, and she's courageous enough to finish the fights she starts. By the time she's ready to return to her home, she's hopeful that she'll be welcomed as a hero. If no one can accept that, she'll just have to show them the error of their ways.

Melonni's an idealistic crusader from a small town in Kourna. She sees herself as a woman who fights for what she believes in... even when no one else around her agrees. When she was younger, no cause was too daunting, no sacrifice too great for the sake of her people. For better or for worse, the villagers of her homeland will never forget her. Now that she's older, she's learning to pick her fights a bit more carefully, largely through trial and error. Deep in her heart, she knows that her decisions will be proven right in the end. By the time she's ready to return home, she's hopeful that she'll be welcomed as a hero. 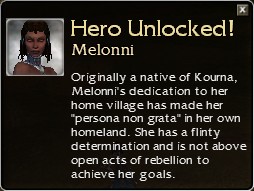 Complete the primary quest Signs and Portents, which is obtained from Emissary Dajmir.

Characters of other campaigns unlock Melonni during the primary quest Battle Preparations, obtained from Seamarshal Bendro.

R indicates that Melonni must be in the party

Melonni starts with basic armor labeled as Sunspear Armor. The armor has a unique appearance that bears a resemblance to both Sunspear Armor and Elonian Armor. Her armor provides +25 Health, and has an armor rating of 10 to 70, depending on her level.

"Melandru blesses my steps, but my heart belongs to Kourna. I am a dervish of the Sunspears, and I know this land better than anyone. Those who threaten my country, like Varesh Ossa and her minions, shall regret doing so."

"Don't let the Kournans get away with this! They have done enough harm to Elona."

"Varesh is defeated and Abaddon destroyed. This is a great day for Elona."

Isle of the Dead:

The Time is Nigh:

Secrets in the Shadow:

To Kill a Demon:

Idle quotes that do not appear to depend on storyline progression but rather on the Koss/Tahlkora/Melonni relationship:

Historical note: The scythe that Melonni (as an NPC) wielded during the primary quest Signs and Portents has changed in appearance from the Nightfall World Preview Event to the release version of Nightfall, as shown in the image provided on the right.

Retrieved from "https://guildwars.fandom.com/wiki/Melonni?oldid=1609777"
Community content is available under CC-BY-NC-SA unless otherwise noted.