Ogden Stonehealer is a Dwarf monk hero in Eye of the North.

Ogden's talent as a healer surfaced early in life, marking him as a chosen of the Great Dwarf from a very young age. As a child, he had the uncommon ability to cheer his fellow Dwarves with simple things: a helping hand to those in need, a kind word to ease suffering. He was a boon to his family and a blessing to his friends. Yet as he grew older, the very gift that set him apart became a burden to the young Dwarf. Empathy can be terrible, and it is a cruel thing on the battlefield. Ogden has retreated into himself, hiding within a shell of determination as strong as mountain rock.
Ogden is loyal to his Deldrimor king and is a true believer in the Great Dwarf. He knows the ancient prophecies of the Great Destroyer, having studied them from childhood, and there are few Dwarves alive who understand their implications quite as well. He realizes the enemy has come at last—fighting in the depths of the earth, boiling up in great numbers, freed by the recent earthquakes. His goal is to fight them, and he will—with any resources available ...until the last Dwarf falls on the battlefield. 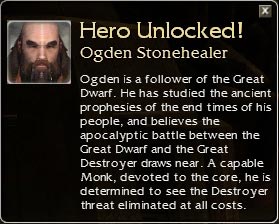 You will receive this hero as part of the reward as soon as you finish the Quest given to you by either:

Ogden starts with Dwarven Monk armor with an armor rating of 60.

Retrieved from "https://guildwars.fandom.com/wiki/Ogden_Stonehealer?oldid=1375275"
Community content is available under CC-BY-NC-SA unless otherwise noted.