I'd used an abominable tonic in LA and was forcibly changed to a snowman ~10 minutes later when the Wintersday event started (stood near the Avatar of Grenth MC'ing things). Needs more testing/clarification before changing the article, but I don't have any more tonics. 79.78.170.162 16:58, 1 January 2009 (UTC)

you mean this effect? 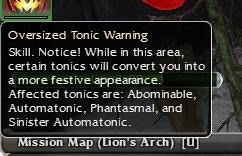 OMG noes, not more of these horribly terribly annoying crap things! I hate the sound they spam in outposts -.-" —The preceding unsigned comment was added by Taki Fujiko (contribs) .

Retrieved from "https://guildwars.fandom.com/wiki/Talk:Abominable_Tonic?oldid=1594837"
Community content is available under CC-BY-NC-SA unless otherwise noted.