Is it actually the opposite colour? If it was opposite then blue dye would result in a yellow axe. According to the chart on the gwguru forums that's linked to from the dye article, there a 120 degree hue shift on the RGB colour wheel, with blue shifting to green, green shifting to red and red shifting to blue. I don't have any warriors, so I haven't done any experiments with chaos axe dye. -- Gordon Ecker 07:17, 16 February 2006 (CST)

I believe he's right.
http://www.realcolorwheel.com/RCWcard.htg/rcwcardrgb.jpg
If we put a color wheel up though, we probably want to make our own so as to avoid copyright violations. I'll volunteer if we do want one.
Lunarbunny 10:37, 16 February 2006 (CST)

Has anyone tested to see the effect of a Black Dye on this weapon? Presumably it would turn black since Silver turns it white, but it would be interesting to see if/how it became black and also retained its glowing appearance. I would do this myself but I lack a Chaos Axe. If someone tries this do take a screenshot. -- Acca 17:39, 6 March 2006 (UTC)

Maybe if we mix something like black, white, and two grey or something. It'll most likely work, but with a really obscure color combo.. Woah! I forgot to sign! - -Sora267

Here you go guys, there's a dye thing for the chaos axe here

I too would like to know if the Kilroy Stonekin chest drop is true. Can someone confirm this? I've gotten a Shadow Blade from a chest during a Kilroy run (I can't remember if it was a Miner's Chest or a reward chest) , so I suppose it's not much further off for Chaos Axes to drop as well. [[AOTT]] 21:09, 31 July 2006 (CDT)

I used Purple Dye on my Chaos Axe and it turned into a kind of Bright Orange.

IT IS Possible! we can make a black dye with the new release of white dyes!

Finally a black weapon without having to pay 10k!

How is this gonna look with White Dye when someone has it, screenshot please -

So any ideas or tests what white dye does on a chaos axe yet?

So I figured I would test out the white/black dyes on the axe, just to have a peek. The white dye is kind of underwhelming, just turning it a brilliant white with lots of glowing goodness. You can see it here.

The black dye was a little more interesting, to me anyway. It completely (or nearly so) muted the glow on the axe, meaning you could see right through it. This screenshot shows what it looks like against my Warrior's armor. Has it always been this see through? Or is this something new?

Anyone have thoughts on the matter? --

Aw, man. I just bought some white dye to test it with. xD I have to say, I was pretty dissappointed, myself. I've never seen that phenomenon with the black dye, though. I am bobo 20:40, 14 December 2006 (CST)

Are any of the new chaos axes inscribable? They all seem to drop in core areas, so im guessing no, can anyone verify? —

Found this in kamadan for 55k many months back before the hoh patch came out...never seen one like it before, never seen one after. few guys on guru told me to keep quiet about it for a bit, and i figure it's time to show they do exist. if someone wants to improve the link please do http://img219.imageshack.us/my.php?image=gw013qg0.png

Well, after toying around a bit with my Chaos Axe and some dyes I had in Storage, I found a dye combo which would revert the Chaos Axe back to its original color, original being either exactly what Dye Remover used to do to it or SO close that I can't tell. The dye combo is Grey, Silver, and Orange x2, as seen in the picture. 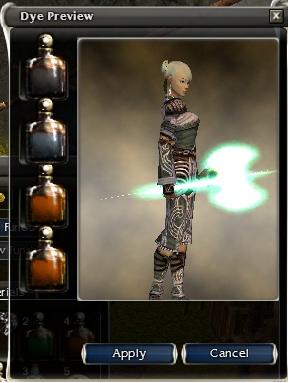 I figure you could get at least a few plat if it's purple/blue (not white) and call it a "Bad chaos axe, but still looks cool." Especially with all the hype from this weekend. But yeah, if it's req13 or something, chances are bad that anyone will want it. If you're really not sure, "guru" it, I use Guru for prices, and GWwiki for everything else. Oh, and to semi-hijack this part of the thread (though it's relevant information to the axes), I noticed Snarling Driftwoods and Armored Cave spiders aren't mentioned on the list of Chaos Axe dropping creatures, despite my experience being quite the contrary (have screenshots if needed.) Oh, and I think a black chaos axe is impossible for one reason..it seems that the dying system for the glow is additive :p Shas'o Kauyon 03:13, 26 March 2007 (CDT)

The Place to Get it

I managed to score a Fiery Max Chaos Axe (Gold, Req 11 though) on my first chest run in FoW. They're pretty easy to find there.

There sometimes in the UW though too.

That is not true, this one didnt come from proph and it wasnt anywhere near the underworld. [[1]] 03:34, 7 September 2007 (CDT)edit, that was me that left that note as you can see by looking in the picture at the customized for version. Probably forgot to sign though.

Well where can you find inscribable Chaos axes then? Mr-HaXx

They're worth about 100k and 50 ectos. They're the highest-priced axes in the game.

There is a screenshot of an inscribable non-max blue above. I know inscribable's don't drop in FoW, and I'm pretty sure HoH only gives max damage? Do the Shadow Army enemy in the Realm of Torment drop them, since I have seen stormbows drop outside of UW (and those are the "elite UW bow" skin). Just a question. - Yellow Monkey (T/C) 19:37, 9 November 2007 (UTC)

Might have been from a Furnace Drake during drakes on a plain.--

Note: added correction on spelling from inscriptable to proper term that is actually a real word... inscribable (meaning something that an inscription can be applied to, thus making it an inscribable item).--ShmEk 05:05, 8 May 2009 (UTC)

How to get blue

i jus figured out how to make the chaos axe a more rich shade of blue go ahead and mix brown and green or add a black if you want ti a little darker Vodna Leluna 18:29, 17 July 2008 (UTC)

Retrieved from "https://guildwars.fandom.com/wiki/Talk:Chaos_Axe?oldid=1474611"
Community content is available under CC-BY-NC-SA unless otherwise noted.