Well this is an okay article but it lacks one major, IMPORTANT piece of info, where the hell do you find them. Does anyone know of any confirmed locations where they drop? I saw one come from a chest in FoW but that is the only place I've seen one drop. Anyone else know of any places?

A presearing location is good, but I am also thinking we need a location for the post-searing (most notably max damage)drop. Anyone know of them???

well, i believe that they drop in fissure of woe, the underworld, hall of heroes, and the boxes in the southern shiverpeaks/snake dance/sorrow's furnace general area.

As far as I know, no mobs, not even the highest level foes in UW/FOW/Tombs, etc drop 'em. They can only be found in chests in remote high level areas, such as the famous chests in Dreadnought's Drift. --User:Tetris L/Sig 15:02, 15 February 2006 (CST)

The chests spawned after the UW reaper quests or winning the hall still have a game-wide loot table, as far as I know. I have seen a crystalline drop in the hall before, and have heard second hand accounts of one dropping from a UW chest. — Stabber 22:26, 9 March 2006 (CST)

They drop randomly. completely random and can drop from anything in the game. the 3 best have been known to have dropped from titans in the Defend Kryta quest. - =WFC=Lavitz

To much bother for those cheese-knifes, but I have never seen one drop randomly in the game, nor heard of such a thing second-hand. --Xeeron 20:44, 22 March 2006 (CST)

Please provide a screenshot to backup your claim. The general concensus appears to be different than your belief on this. A screenshot can settle it once and for all. Note: a screenshot will need to be taken before it is picked up, when it still says "reserved for ..." to prove it was dropped by a monster and not just pulled from someone's inventory. --161.88.255.140 16:13, 25 April 2006 (CDT)

seriously, its just a sword, yes it looks cool, no it isnt all that great, just chill out, pple sell them for ridiculous amouts of money and you buy them, if you complain then it is your own foult you"POV" is up your arse —The preceding unsigned comment was added by 4.88.67.11 (talk • contribs) 14:51, 27 June 2006 (CDT).

this may be a really stupid question, but what's a quest reward chest?//Go defenestrate yourself.

I found a purple Crystalline Sword from a quest 'barrel' in Sorrows Furnace doing one of the quests, I tought it was the kilroy stoneskin one, meh it wasn't even max damage but sold it for 40k =D. --Sigm@

I just got one in Sorrow's Furnace from one of the Kilroy reward schests.TboneK

ok, to clarify: gold crystalline swords drop only in hoh. and only means ONLY. purple ones can be found only in some quest reward chests. and again, only means ONLY. so dont be surprised if u dont find them.

While it is quite the unique skin, I have to disagree wholeheartedly that it's "cool-looking." Period. It reminds me a TON of the Brotherhood sword in FFX, but I thought that one looked tacky as well. And while it is completely a matter of opinion, stating it like that is POV to the max. Putting in a weasel word, "arguably," doesn't make it any less POV; the message remains the same. I understand that people want it, for whatever reason, and that's their thing, but this article seems like it was written by someone who worships said sword day and night. I understand that I'm too POV to successfully re-write this, so I'll leave that to someone else, but, as it stands, the article needs work. ||Auron of Neon 18:41, 11 June 2006 (CDT)||

It makes me sad, knowing that this sword, which admittedly doesn't look that good, could have been as good as this. The Unrealist 12:36, 11 March 2007 (CDT)

I really don't see much of a difference. It looks to me like the best it could be given the engine. Specular lighting would make it look a little better. DavimusK 20:38, 18 May 2007 (CDT)

I always liked the look of this design for a 'Crys' type blade. Now that's a cool looking sword.

Sometimes in the intrest of science, one must make great sacrificies for the fruit of knowledge. --Draygo Korvan (Yap) 14:59, 27 June 2006 (CDT)

Maybe somebody just bought several million gold on auction and didnt know wwhat to do with it. Or maybe he gave someone else his password and they had a little fun... --Bob the Milkman 01:11, 22 July 2006 (CDT)

actually, the one in pre-searing is a longsword, with the crystal skin. o, and its a quest reward, so no salvaging. Detraya fullvear

Anyone hear of a Rare Material called a Crystalline Shard being salvaged out of these swords? I saw an auction on Guru selling one of these (with a legit looking picture) for around 500k. Anyone know about these? --Shadowed

I saw that i drop from quest chests but from Elonian Chests??

Do the Kilroy quest with hench and heroes and once a chest appears, send them far away (using a flag) so they appear greyed out in the party window. Then open the chest and all drops are assigned to you. I.e. higher chance to get a Dwarven Axe, Crystalline etc. Only purples drop from it though.

I've heard that Anet is trying to drasticlly increase the drop rate to bring down the price.

It says on the location part they drop from chests in sorrows furnace, the underworld, hall of heros & the fissure of woe but it doesnt say anything about the old chests that were in the southern shiverpeaks /snake dance area? if they dropped in the southern shiverpeaks/ snake dance area chests wouldnt that make it a slight possibility that they could drop from one of the regular now locked chests or even a slight possibility of a drop from monster loot out there? T1Cybernetic 00:58, 23 October 2006 (CDT)

No, as those chests were similar to the SF/UW/FoW/HoH chests in that they could drop just about any item, regardless of their location. Just because the Kilroy chests drop crystallines doesn't mean the Stone Summit are about to. -

Since this weekend update, cristallines and basicly every weapon dropping of ha chest are inscriptable. checked one ingame :/ Watch these prices fall incredible amounts. Every sword will be 15^50. 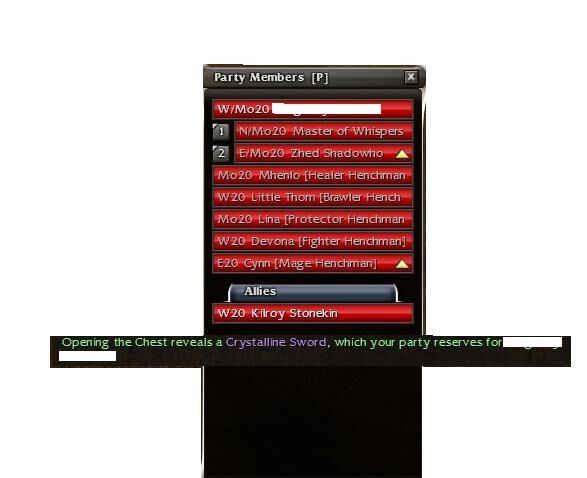 Awwww, did someone accidentally salvage this? Come here, let me give you a hug. Don't worry; it will be alright. — JediRogue

I salvaged one of these. The one from Pre-Searing, that is. Nice mods on that sword y'know. But...I actually have salvaged a real one. It was crappy, like req 12 non max damage blah mods, so I don't worry.

Is it possible to have purple inscriptable Crystalline swords? and if yes, where could one find one?

I have seen one...They do exist, do not konow where they drop though.

Check any bigger PC (price check) forum, they got _much_ cheaper because of that e.g. here... german. Check any bigger selling forum for bidding (tho not many ppl seem to know that yet, still enough to notice the price difference) --Birchwooda Treehug 10:53, 21 September 2007 (CDT)

I think that a screen or somebody's word is what we need for proof that these can drop from end-dungeon chests. In my opinion, I think they will. I have gotten a runic blade from Murakai's Chest, and all other rare types of HoH weapons hae been reported to have dropped from some sort of chest in EOTN (except maybe dwarven axes). So I think that it is safe to assume that the crystaline sword is a 1 in 100,000 or so drop from a singular dungeon like stygian reavers. Probably one that almost nobody does like Arachni's Hunt or something. Ressmonkey 02:07, 18 November 2007 (UTC)

Judging from the rarity of the sword, and the armor that guy in the pic is wearing (starter warrior), that is obviously the sword from the quest reward for Prize Moa Bird.

There is no difference at all ---

I think it's pretty obvious given how many have been for sale recently and the various people who have told me they/their friends have gotten one (repeat for many other people) that these drop from the chest but for all those denialists of information/sceptics who keep asking for information to be removed for whatever questionable purpose: 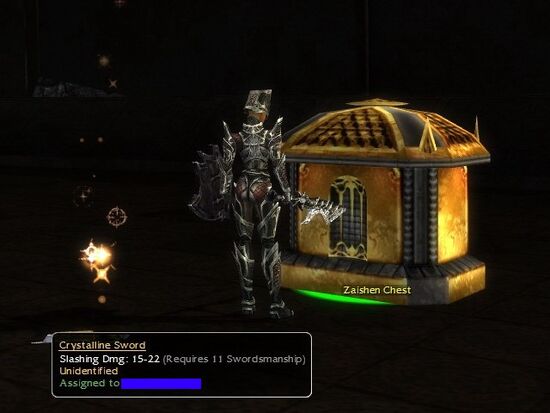