I'm reserving judgement till I see it in game...but yeah...my initial reaction was something along the lines of "wtf?"...perhaps it's supposed to be a creature from GW:EN? Can anyone figure out what "Demon" it's supposed to represent?----Thor79

"bad" is too mild for what this headgear looks like... i mean they were WAY off with the lion masks at the new year celebration, when they honored the celestial PIG, i mean they coud have made a pig outfit or some that'd turn you into a pig, when worn inside the outpost or some... i know lions ought to bring good luck but many ppl dont so WAY off... this new mask looks like the margonite face, 3 visor holes that i'd reckon would shimmer but still... we'll all see wot happens.. <- dont like it not covering up the face completely... Mister Muscolo

Chinese New Year (which it was based on) is traditionally celebrated with Lion dancing, hence the lion mask; the celebrations don't normally entail people dressing up as the animal that represents the year. It's just not normally done. —

kyrasantae 15:14, 4 July 2007 (CDT)
Hmm, I personally like how it looks... but I wonder what it's supposed to represent? an Oni Mask would have made more sense for this event, being a Canthan holiday and all. This looks more like a Nightfall / Domain of Anguish type thing.
And out of curiosity, anyone know what armor that is the person's wearing? Assuming it's an actual armor set... --

wouldnt know what that mask is. reminded me of a mandragor when i first saw it though, but i checked and it looks nothing like it. maby i shouldnt check these things anymore after 2 AM Thempest 07:29, 4 July 2007 (CDT)

The pic looks like someone is inside a Scythe of Chaos, you can even see some clipping issues. If I remember correctly it was at the last festival that the darkness begin to breach in Cantha so it could be it but I would have prefer a margonites mask then a torment.—├ Aratak ┤ 13:12, 4 July 2007 (CDT)

I don't see why people say it look like a margonite's mask. If the pic is right and not just a hoax it's a torment, like the Image:Scythe of Chaos.JPG. All the margonites are 6 defines eyes on their mask. The grasping would be better then torment. I just saw that the image come from the official site, shoot we are really getting that ugly thing.—├ Aratak ┤ 14:23, 4 July 2007 (CDT)

Nice job finding what the mask was based off of. My first reaction was a Telvanni mole crab helm mixed with a random Redoran guard helm out of Morrowind, though I knew that was just a random synapse misfire on my part. I also highly doubt the image is a fake, seeing as how it's on the event page on guildwars.com. Personally, I like the mask :) --

Imo mask would be quite nice if it was... well... fullier? Bigger? I mean - there would be no face visible, now it looks like this mask is too small on necromancer pic, visible face just ruin whole effect. DragonLord 12:14, 6 July 2007 (CDT)

Any1 wanna add a picture to Discussion and/or article site (for those who for some reason cant get onto guildwars official websight).

It says on website that you need "Victory Tokens" to get it, will they be the same as these http://gw.gamewikis.org/wiki/Victory_Token

It's real... the picture is here on the Official Site. ~~

Obviously, ANet's faking their own event items. I call scam! --

Actually, it doesnt say anywhere on the guild wars page linked that the picture shown is the demon mask. It talks about getting one, but thats two paragraphs down from the pic. It doesn't state above two paragraphs is a picture of a girl, shes wearing the mask.68.224.139.248 23:38, 6 July 2007 (CDT)

Never mind the fact that the name of the image on their server is demonmask.jpg ;) --

The mask in the quests

The players playing the grasps in the quests have a mask, which is with no doubt the mask we're gonna get. I've posted one pic on the page, and here is another: 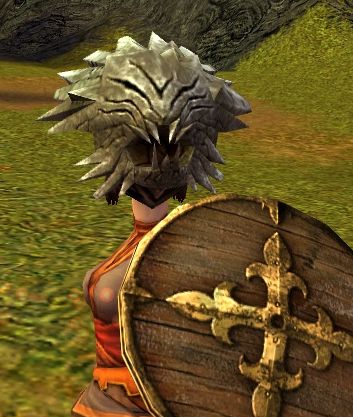 And that's entirely different from the one ANet showed, though with a similar style. Perhaps there will be more then one mask for the event? --

The one Anet showed was not an in-game one, more of a concept art. the grasps are demons, and the people who plays them are wearing those masks. isn't that convincing enough? Foo 05:06, 6 July 2007 (CDT)

It just seems a little strange to show off the first mask, then drop the idea completely. In past events, the mask they show on the site is generally the same one you gain from the event. Thus my un-convinced-ness. --

The site version also had claws protruding from where the lower jaw would have been, which looked pretty cool in my opinion. --

What about all the other monsters in the other missions like Chaos Wurms and Wrathful storms that seems like a few to many masks for them to all be on offer... however they may offer 1 or 2 of them.Judgedread33

The official webpage pictures a girl wearing a scythe of chaos mask in relation to the special events. But her picture is next to the paragraph about the missions, not about the masks. It simply says a "demon mask" will be available, it doesn't say which type specificlly. Hell I'd be willing to bet in the end you can choose from all the masks, there's little point in making half a dozen masks and then only using one of them beyond the special event.--85.62.18.3 07:28, 6 July 2007 (CDT)

You know I think you're right, atleast I hope so.--(unsigned)

I realy hope you can get all of them. Theres actualy only 4 models for masks as the dryders and wurms are actual monsters in the missions and the scyth/wrathfull use the same mask.--=^o.o^= (Amantis Asoko) 05:07, 7 July 2007 (CDT)

The Scythe of Chaos actors have a mask that fully covers your face, it's not the same mask as the one pictured on the event webpage. Also, as I pointed out above, the name of the file on the event page is demonmask.jpg. I highly doubt there will be multiple masks at the end of the event. --

I cannot be the only one seeing the similarity between the masks and a headcrab from half life...example of a 'fast' zombie seen here: http://upload.wikimedia.org/wikipedia/en/e/eb/Half-Life_2_fast_zombie.jpg I'm going to get a set...hopefully they can be dyed, because having a yellow one would be hilarious. That being said, it's about the only positive thing I can think about on this mask-I have to agree that it is pretty ugly, and that we probably won't get a choice.

Actually, "Headcrab" was the first thing I thought too :) --Snograt

I noticed the similarity too. --Aozora

Explaining why there are so many different masks

If you go to te official webiste and take a CAREFUL read about this year's event you will read this:

"[...] this year's festival will include dramatic reenactments of those events, and all are invited to participate in these little dramas. Whether it's facing off against hordes of Naga and Yeti driven mad by papier-mâché demons, clearing these same "demonic" forces from a bandit camp, or accepting the calls-to-arms from Captain Rujiyo when more "demons" attack various towns across the island, participants will find numerous ways to join in the fun."

Thus all the "monsters" we are killing in the missions given by Captain Rujiyo are just Canthan citizens (NPCs) taking part to the RE-ENACTMENT and that is why they wear masks resembling the "monster" they are interpreting.

So after taking all of this into account you should understand why there are so many masks and non of these will probably be the DEMON mask given at the end simply because there are no DEMON monsters. The most probable guess is that the mask wich will be given away is that of the official website.

Hmmm. you could have seen that it's just an act by playing the quests or missions. sure there are no demons, but there are lots of actors with 4 types of masks. my probable guess is that those four mask would be available. Foo 13:43, 7 July 2007 (CDT)

It's gotta be against some sort of rule to post pics of that, hehe... --

It's impossible to get a demon minipet for 500 tokens since max item limit is 250.

I agree...I like the look...would have been nice if we could have gotten multiple masks. Like take a mask from a captured demon...or something. Oh Well.----Thor79

If you're wearing elite necrotic, it also suits good...with exception of the color ;( cause it can't be dyed... --

I am sorrow... well i expected it to be able to dye something... like a glow from the eye slots or some... well... by my reckoning it aint worth 250 tokens alltho i get 450 per hour... Mister Muscolo

It would be nice to know HOW to get it. I heard you just have to be present when that guy pops up in town and have 250 tokens in ur inventory. But is this true, en when does this person pop up ?

The Emperor pops up at Shing Jea Monastery according to the Finale Timetables which you can find here. He appears in the main plaza and starts walking to the Xunlai Agents (where the big statue is). There, he makes his speech and after that, he gives you the mask if you have 250 Tokens in your inventory. Actually, I think there's a bug in some districts: when the message "The Emperor will arive in 15 minutes" appears, he's already there.

Its only a bug for the late districts, because it indicates when it will arrive there, while in disstrict 1 he is allready present... something to do with lag i think... so you can jump from diss1 to diss60 to collect the rewards 2x... rly cool Mister Muscolo

Uh duh its a headcrab mask!

Is it just me or does this mask pale in comparison to the Pumpkin Crown? It doesn't exactly stand out. Yeah i think that the grasp head would be cooler(and fit better).

I put a couple of runes on mine, and then salvaged one out, believing that the mask could not be salvaged. But infact, my mask was deleted along with my sup vigor. Please could someone take that off? I don't know if I should...

Completely deleted? That doesn't sound right... you were using an Expert/Superior kit, right? And you didn't salvage even crafting materials from it? --

What the anon is saying is that he attempted to salvage his rune off, and the mask was deleted instead, along with the rune... --

Yesterday I put a demon mask on my characters face and I didn't get the full mask. It looked like there was dust hanging round my head. I don't know how to discribe it. The look of it completely changed. Does anybody else also have this?

Problem solved, it was due to an out of date graphics-card.

Retrieved from "https://guildwars.fandom.com/wiki/Talk:Demon_Mask?oldid=1135919"
Community content is available under CC-BY-NC-SA unless otherwise noted.