Is anyone else curious about this previously non-existant boss?

*Raises hand* Where exactly was he supposed to spawn? And the updates note says "sometimes not to spawn". If it sometimes did spawn, why hasn't anyone every heard of it before?--

We could make this a scavenger hunt. First one to find Dzabel gets... something?

Holy shit Viper, you EC'd me and said the exact same thing as me. Stalker...--

Wait, you're talking as if you're sure he's a boss, but for instance on the GWW article he's listed as a NPC... --

NPC = Non Playable Character/ Computer Played Char. That means: Anything you are not. ---

You're right that it doesn't say it's a boss, but that really sounds like an Elemental (might be a centaur or something), and they shouldn't have put in the NPC stub anyway, it should've been stub --Gimmethegepgun 22:02, 10 January 2008 (UTC)

They should've made a typo in the update notes, or in the (boss)name itself :D ---

Still no luck on finding him, I hope he'll be worth the effort! I'd be really pissed if we're all wasting our time for a dumb new collector...--

First thing that came to mind for me was Hajok Earthguardian. I thought maybe one was Hajok, and one was meant to be this guy. Checked both. Neither have been changed. I'm not looking anymore, due to laziness. My best guess would be to look in a place with lots of Dervishes or Earth Elementalists. And look for a large area devoid of bosses. Other than that, i got no idea.--Darksyde Never Again 22:24, 10 January 2008 (UTC)

This would be amusing if this wiki finds the boss before the "other" wiki. Then they would just blatantly copy our material :D Aggro

He may drop an awesomely skinned weapon--

Unfortunately, I can't help look, but Vabbi sounds like the most likely place. Anyone checked missions to make sure it isn't there?

Bah, you and you Policiy nazis over there. Besides, there's about 3 people there looking for it.

I could never agree that content on the "other" wiki is "more reliable". Aggro

I remember back in the day when they were already a couple months old and yet all of their information was copied (VERY directly) from this wiki, and about 80% of the links were red because they had no info --Gimmethegepgun 23:20, 10 January 2008 (UTC)

That page must be getting hit hard, because it wont load for me. Aggro

Could have fooled me Aggro

Somehow I also think this page is getting WAY more hits than theirs too (though I can't be certain, we unfortunately don't have one) --Gimmethegepgun 23:27, 10 January 2008 (UTC)

They have 5 hits. And I wasn't attacking, if he thinks the other wiki is better, why is he here?

Being that this wiki is older, and has a very faithful core of contributors... I think we can well rival the official wiki. The only thing they have going for them, is the in game linking to the wiki. Aggro

Don't even give me that crap. I was even barely aware of the inner workings of all that... and frankly I dont care... Good riddance to bad rubbish. Aggro

And we care why? You are a random person in the world. To what bearing does that affect me? None. Aggro

Actually, since Anet hardly does anything at the official wiki, were it not for their stupid policies and stuff and had all speculation not happened here (as we came first), there would be just as much "stupid and pointless" speculation there. --Shadowcrest 23:32, 10 January 2008 (UTC)

I predict it will be a mesmer boss, with Visions of Regret, in either Bahdok Caverns or Dejarin Estate. This boss will use the Tormented Land style skin. What does everyone else think?

Ah, so obviously you're not as accurate as you think. Btw, you can't use the "stealing" argument on this, because about 95% of the information about the game the "official" wiki has was stolen from us in it's entirety, including spelling errors --Gimmethegepgun 23:40, 10 January 2008 (UTC)
Yet on the "other" wiki, someone placed on the page that the boss is infront of the "Do Not Touch" in Forum Highlands... which would place him right next to Commander Sadi-Belai. Im finding this hard to believe. Aggro

They also say he has obby flesh which im pretty sure is a prophices skill —The preceding unsigned comment was added by 82.39.38.76 (contribs) .

So who found him in Forum Highlands?

Well I guess someone needs to go confirm. 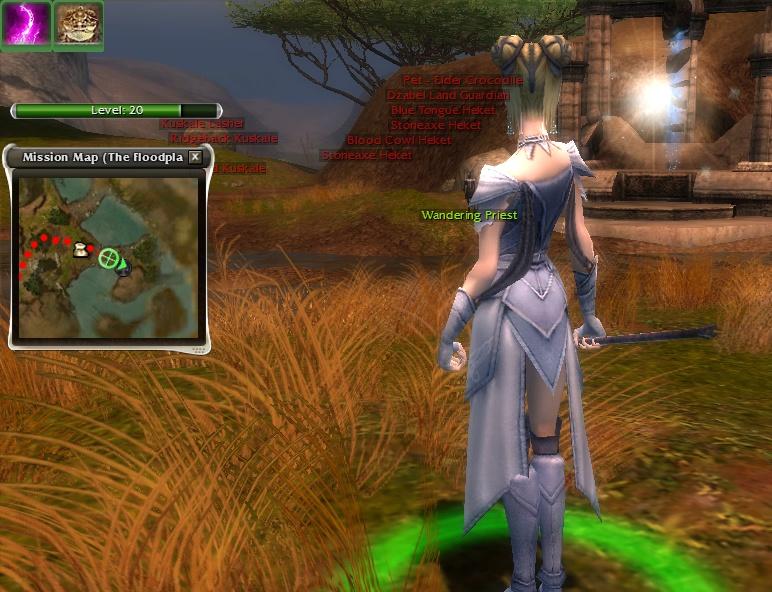 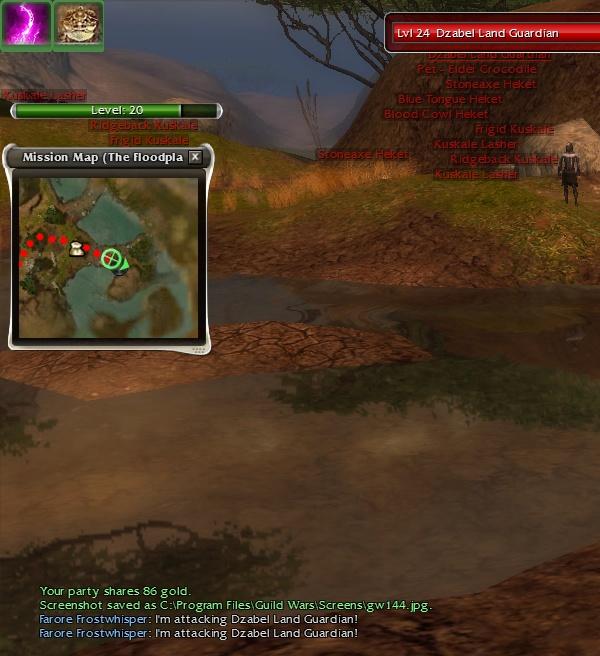 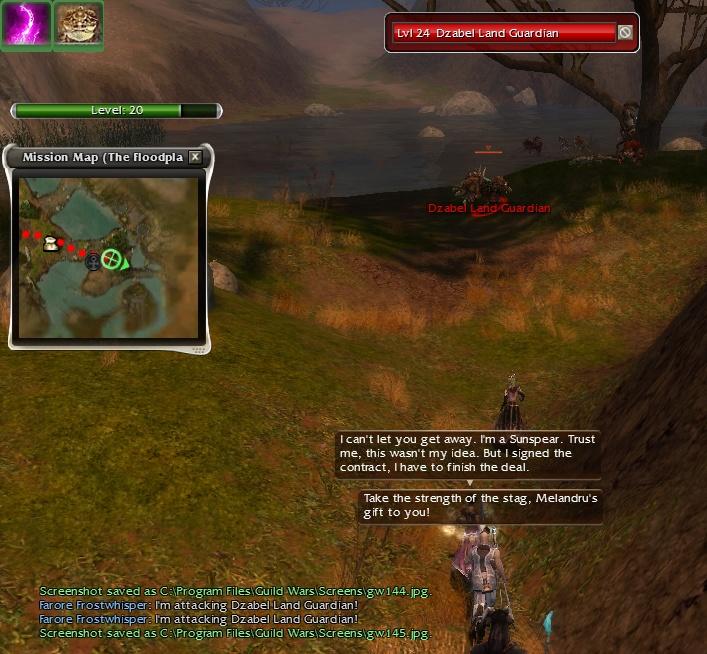 Nice, we own. Great SoC, IP

And to think, I got myself killed to find out what skills he used -_- Aggro

It had to be said

We pwned them, yes. Not they pwned :P

On the other hand, if he has Disrupting Lunge, my 130 is probably f'd.

Looks like they already have some skills though. Quick, someone SoC!

They got a SoC, but no proof, so someone RV's it!

Damn, i'm fighting him at this moment, i guess there's no point now, anyone else think Mahnkelon is overflowing with bosses?--Darksyde Never Again 00:15, 11 January 2008 (UTC)

got proof and location 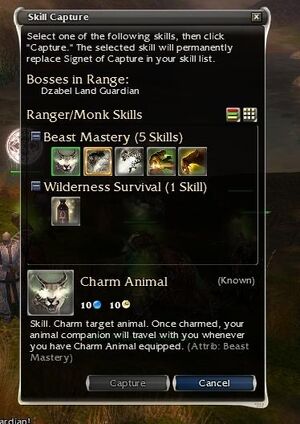 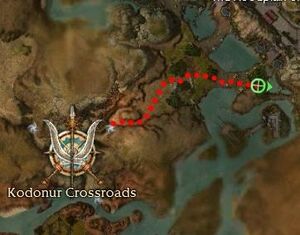 Lets not copy any more info from them like their fake location, wait till we get a screenie of it.

My Paragon is in Crossroads, american D1, if anyone wants to party up and hunt the green. IGN: Gene Starrwind. Aggro

Of course, all the Official Wiki's bow info was added by the same anon, with no one confirming it.

Can someone show me how to upload this to wiki? I can get a pic in with me posing with it if necessary. —

That picture's too damn small to see anything. Just doa search for a pic like image:dzabel'sbow.jpg--Darksyde Never Again 01:14, 11 January 2008 (UTC)

I get second. First time I went out to farm him, I got his green. Go me!--

You suck Marco :P We have done like.. a dozen runs with nothing Aggro

Heh, team play ftl. 130 Dervish solo ftw!! I've uploaded a picture of it. Now flame me for how much it sucks.--

we beat them to fill out all the info including pic of the bow. Yay gwiki community!!

Hey Randomtime, do I get RT points for uploading first image of the bow??--

They beat us to SoC, but they couldn't add it because their useless policies bogged them down since they didn't have hard proof --Gimmethegepgun 01:34, 11 January 2008 (UTC)

I got news for you folks...I was the guy who posted the stats for the bow first over at official and i posted the confirmation photo over here in response to what Entrea wrote. Check the timestamps before you crack the champagne bottles. 67.191.245.177 01:34, 11 January 2008 (UTC)

Our information about the boss and the bow are as complete as yours... but you forgot something. Where's your unique references to it? Can't find em? Maybe that's because they don't exist! However, they sure do here! --Gimmethegepgun 01:36, 11 January 2008 (UTC)

Let's see... You guys had the incorrect skill listing for 16 minutes after we had the correct ones, took 5 minutes longer to get the screenshot (and ganked it from us no less), and have incorrect information saying the boss was added in the update, when in fact it was debugged in the update so it actually spawns. And you still don't have the weapon linked up into the QRs, weapon listings, etc --Gimmethegepgun 01:50, 11 January 2008 (UTC)

OMG, please both of you STOP. This is not a competition. Get over it please.--

Fine. On a more important note, has anyone confirmed level 30 for HM, or is that an assumption on the Floodplain of Mahnkelon page based on how everyone else is 30? --Gimmethegepgun 01:55, 11 January 2008 (UTC)

it is level 30, I know because I farmed him in hard mode, that's when I got his bow--

I practice that. having fun w/ the hidden message conversation?--

You guys are pathetic. The wikis should co-operate, not compete. I'm ashamed to work with you. --

Yup. I didn't have the need to post about this on gww. --

That's because none of us went over there to start bragging about this wiki's superiority. I'm sure that if we had they would've reacted the same way. If not for the fact that even thinking about bringing a conversation off course from the game would probably get them banned for a couple of days cause of their policies... --Gimmethegepgun 03:32, 11 January 2008 (UTC)

Nope. Actually it is because most of the editors there came from here and realise that the wikis should co-operate instead of having such a rivalry as you see it. The rivalry is mostly one sided and mostly from you newer GWiki users. --

Those bastards will never win!
Ehh, that wikis to strict for my taste, have a rule for every little thing, besides we have history here, and the histories to prove it :) :)--Alari 05:43, 11 January 2008 (UTC)

I think the fact that I am an older contributor here, is one of the reasons I have such pride for this wiki, and lack there of for the other one. When someone comes in here and tries to trash us, I feel compelled to stand up for what I believe in. Occasionally that goes to far, and thankfully I know my limits (if you asked me that 2-3 years ago, It'd have been completely different). Aggro

Regardless of Wikipride and petty competition, remember that assume good faith and no personal attacks covers anons too. Sigh...I have reasons to dislike GWW as much as any of you do, but like Gem I also understand that it is almost always in the best interest to work together instead of fighting. Don't let pride become vanity. We can't afford that anymore.

I'm amazed by the tardiness of this bug update...

Retrieved from "https://guildwars.fandom.com/wiki/Talk:Dzabel_Land_Guardian?oldid=1618172"
Community content is available under CC-BY-NC-SA unless otherwise noted.