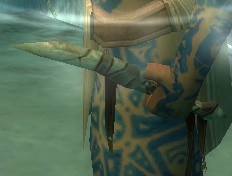 The one in the picture dropped in Old Ascalon in Fort Ranik. From what exactly I couldn't say. It's been a long time that I updated that pic. The reason I know where it was from, is that I took the screen directly outside the Frontier Gate after I got there. Attribute-wise I can't remember. -Gares 01:07, 30 July 2006 (CDT)

After sifting through the Factions collectors, from that it seems each attribute has its own item now. Blood Magic = Blood Knife, Curses = Bone Idol, and Death Magic = Bleached Skull. -Gares 01:07, 30 July 2006 (CDT)

And, after trying to keep track of all drops instead of just rare skin drops, I found out that they actually do drop in Factions. -- Gordon Ecker 20:04, 29 August 2006 (CDT)

Because the linked attribute for the mummified claw version is unknown. I might've added the tag before I found out they were core, in which case the question of whether they're core or not could've been a secondary reason. -- Gordon Ecker 20:04, 29 August 2006 (CDT)

in a quest in haiju lagoon(return the missing purse) a creature called a ravenous drake drops a grim cesta.

I just remembered that I got one of the mummified claw cestas in the Jukanur Diggings mission. Assuming they're still dropped in the final release, we should be able to get an answer soon enough. -- Gordon Ecker 06:28, 18 October 2006 (CDT)

Yeah, I just got a death one too. I think we can assume it's only one attribute unless someone finds one for the other attribute. -- Gordon Ecker 01:51, 25 February 2007 (CST)

Ive found two... One was an energy+12 death req9 gold inscribable from a ravenous mandragor in nightfall.... that was before i knew inscriptions could be replaced without trying to salvage the inscription out (new to nightfall) and i destroyed it on accident. The other i found in presearing and I still have because the skin is simply badass eventhough the stats suck. -The Black Leach

Should the -Hp mods be listed on this page alongside energy bonuses?-Onlyashadow 08:09, 11 September 2006 (CDT)

Actually the template used is obsolete, but has not been upgraded. It will not show energy bonuses as those are universal to all focus items as are -HP mods. While there has been no crusade to fix those obsolete templates, I will fix this one now. -Gares 08:27, 11 September 2006 (CDT)

At the moment, there are the four "normal" Cesta images. Maybe it should also added the -50hp cesta quest reward item with the blood knife skin? -- Zerpha The Improver 13:34, 29 April 2007 (CDT)

Anyone also notice that the gorgon head version looks sorta like a rough image of Medusa? --

Retrieved from "https://guildwars.fandom.com/wiki/Talk:Grim_Cesta?oldid=917559"
Community content is available under CC-BY-NC-SA unless otherwise noted.