don't think it possibly being related should be put in article and any ideas when it was added?

it was added 23:51, 27 August 2007, most peopel think it has to do something with this whole Moa Egg scavanger hunt. -Anti Oath

If they add something to that will make the herring turn red, I will crack up XD --

This herring is probably used to cut trees (those who didnt understand, watch Monty python ;P)

Why the Moa Egg Assumption?

Why are people assuming that this Herring, and the Volcanic Rock, are related to the Moa Egg? Just because all these items apparently appeared in the same update doesn't mean that they're related. A Moa Egg and Nesting Material? - maybe, because that would make logical sense. But Volcanic Rocks and Herrings? - Not so logical. The Wiki policy for speculation has always been reserved for and confined to Talk pages. How much speculation are we going to allow on the article pages for these items? It's getting messy, and looks silly. These articles need cleanup, and speculation needs to be confined to the respective Talk pages.--Ninjatek 08:12, 28 August 2007 (CDT)

Volcanic Rock to either break the egg open or a "hot rock" to incubate it. Herring to feed the hatchling. This isn't completely a leap, especially since these items have apparently all appeared at the same time. Arshay Duskbrow 08:57, 28 August 2007 (CDT)

I disagree. I think it's too far-fetched, but that's not the issue. The issue is speculation on article pages. Speculation should be on Talk pages only, be it far-fetched or not.--Ninjatek 10:34, 28 August 2007 (CDT)

I don't think it's far-fetched, but you're right that speculation should be on the talk pages, not on the article.--

I think others will agree that the speculation belongs on the Talk page. I will cleanup the abovementioned articles accordingly.--Ninjatek 13:43, 28 August 2007 (CDT)

How about a Red Herring?

How do you know it's not a Red Herring? IE: Totally useless misdirected clue?

Well, its worth a shot anyways then isnt it?

I'm hoping you take the herring to an asuran weaponsmith 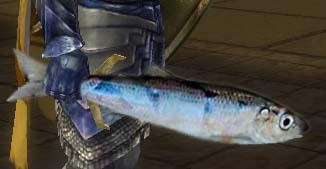 My thinking is that it's a "throw-away reference," where one ArenaNet employee was like "Hey, what fish should we use for the moa chick to eat?" and another said "Well, how about a herring? People might get a kick out of that." So it doesn't actually have anything to do with Monty Python, but if people want to think it does, that's fine.

Retrieved from "https://guildwars.fandom.com/wiki/Talk:Herring?oldid=1595433"
Community content is available under CC-BY-NC-SA unless otherwise noted.