There are some differences and pros and cons for both. Having no exausthion effect and some more damage is really nice - but it only hits 3 foe and is an elite skill so you can't carry any other elite skills. --

Not very fond of the recharge though...then again, if u count towards the exhaustion add-on from Chain Lightning it's a little lesser. >> Trace 20:23, 24 September 2006 (CDT)

I guess the supposed appeal is the maximum air damage (like Orb) instead of the nerfed damage of Chain lightning, the faster cast and the possibility of no exhaustion. However, I think 20 seconds recharge (and being unable to use Renewal to metigate that) is blech. --Karlos 18:59, 5 October 2006 (CDT)

This is more like lightning hammer than chain lightning. Finally a good air magic elite.--Coloneh

Exhaustion. Its decent damage but not at all spamable. This is why so many people hate fire eles, they use metor shower 5 times in a long battle and cant do anything usful for a LONG time.--Coloneh

A boss in the Dzagonur bastion has this (I think the easternmost general, might be westernmost, assuming they're always in the same spots). --Fyren 05:18, 29 October 2006 (CST)

Is it just me, or there some sort of graphical glitch with Invoke Lightning? It seems to jump to more than just two nearby targets. Matter of fact... it jumps to "every" target nearby the caster, though the damage effect only applies to two (I believe), not all. I also just noticed something rather... strange. I think that when you strike a foe with Invoke Lightning, when it 'jumps' to another target, the skill ITSELF seems to jump, rather than just applying damage to another target. It then jumps from THAT target to two additional targets, ect. That could be the cause of the "graphical glitch" I mentioned earlier.

I suggest this because I'm currently running a spirit build. I'm in The Ruptured Heart, fighting Margonites. One was a Margonite Sorcerer who used the skill on me. All my henchmen were behind me (I was on a bridge), or up front melee'ing. The only "nearby" things were my three spirits: Pain, Anguish and Bloodsong. I was the initial target. By how the skill is described, it should have jumped from Me to two of my spirits. Strangely, Pain and Bloodsong both died instantly, and Anguish was left at ~30% health. All were full health before the attack. Additionally, I myself was damaged.

What exactly is going on here? (no, I don't remember if there was more than one Sorcerer =X)

I decided to see how the hits from Invoke Lightning go, and I found something interesting. 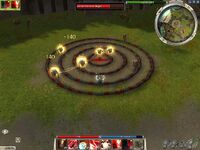 I was targeting the centre target, and yet my invoke Lightning hit one of the targets that is "In the Area." This appears to show that each hit is near the last foe hit, and that the AoE is really "In the Area." --Curse You 19:50, 26 December 2006 (CST)

Concerning the discrepance between damage and graphic effect: maybe the remains of a time when this skill used to hit more than two additional targets??

I think heroes see this as an ele skill that causes exhaustion, since they hardly ever use it, even while they have an enchant on them. ~Avatarian 86 10:58, 27 April 2007 (CDT)

vital boon is a cast once skill, invoke is fairly spamable, and the beheviour difference matters. putting up a note. --Honorable Sarah

Maybe they are just too attuned to finding perfect situations to use this. I know because I bring skills that cause exhuastion like obsidian flame and my hero uses it all the time when I don't disable it. M s4 14:51, 5 May 2007 (CDT)

Actually I doubt exhaustion has anything to do with it. My heroes use chain lightling frequently and amassed lots of exhaution. He however rarely use skills like earthquake. Don't know why---DK

This spell seems to function much like Deathly Swarm and Vampiric Swarm. The 'nearby' applies to whichever target was hit last, so when in a line, if positioned properly, this spell can hit a foes just outside radar range. --MagickElf666 14:25, 5 May 2007 (CDT)

I did some testing with this spell and it behaves oddly with arcane languor and equinox. Here are a few of the situations.

Is this worth noting? If it is could someone make a nice chart to show it? Darn it I keep forgetting to sign Kelvin Greyheart 22:21, 26 May 2007 (CDT)

No equinox, with arcane languor, no enchant. causes double exhaustion (beginning and end of cast)

It all works the way I expected it would- the fact that Invoke Lightning causes exhaustion at the end of cast is a known skill odditity, and the exhaustion from Arcane Languor works just as usual- at the beginnign of cast. Equinox also works the way it should- it doubles exhaustion- EXCEPT when used with arcane languor and without an enchantment. In this case, it should be quadruple exhaustion.--Lux Terribilis 19:49, 26 July 2007 (CDT)
bit old, but perhaps equinox and AL don't "double" exhaustion in a sense, but simply add another set of it, would make it 1000x easier on programing team I'd say, which explains the last 2, but then if it causes 4x exhaust with eq and AL on other spells, thats just weird 121.45.250.141 12:43, 12 December 2007 (UTC)

Yes, although with the new chain lightning buff, I wouldn't see why you would waste an elite slot on something that deals 10 more damage. Exept if you take them both maybe, but still...--

Retrieved from "https://guildwars.fandom.com/wiki/Talk:Invoke_Lightning?oldid=1500251"
Community content is available under CC-BY-NC-SA unless otherwise noted.