Friends with the Am Fah?

I am currently watching a group of Jade brotherhood and Am Fah mingling but not fighting, when i approached, both groups turned hostile to me, killed me, then continued to be peaceful with each other. BTW, this was right outside of the marketplace. 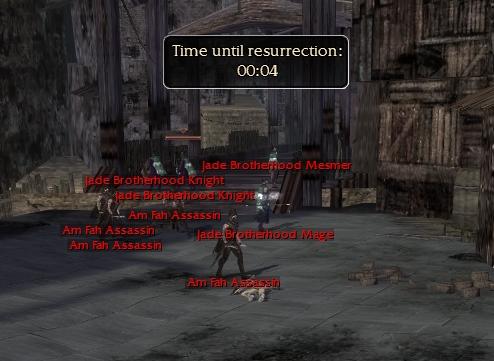 were you doing the finding the oracle primary quest because that happened to me too--Hapsta 18:22, 18 July 2007 (CDT)

The Jade Brotherhood consists of Warriors, Elementalists, Mesmers, and Ritualists, and bosses. This might be worth mentioning.

It says that the only classes that the Jade Brotherhood uses are Elementalists, Mesmers, Ritualists, and Warriors, while the Am Fah only use Assassins, Necromancers, Rangers, and Monks. This isn't true if you are counting bosses, as an Am Fah boss (Sun, the Quivering) is a Warrior, and a Jade Brotherhood boss (Kenshi Steelhand) is an Assassin. I took the liberty of editing this myself, but feel free to remove the entire section or whatever. --70.176.247.196 01:46, 24 December 2007 (UTC)

Retrieved from "https://guildwars.fandom.com/wiki/Talk:Jade_Brotherhood?oldid=1127229"
Community content is available under CC-BY-NC-SA unless otherwise noted.