-I don't know, Lispy Stinkface is pretty hilarious too.

Huh, I thought the Verminator was from Married With Children. At one point Kelly Bundy gets a job as a mascot called 'The Verminator'. -- 127.0.0.0

Ask Shiro, too. Seriously, it seems like ALL the fortune tellers in Guild Wars are somehow tied to corruption and causing nasty fates, and/or Abbadon. Shas'o Kauyon 09:37, 17 February 2007 (CST)

Hmm. Is it only me, or A.Net hates fortune tellers? Geez, they really should stop making ,,lets create a corrupted, evil and badass fortune tellers in next chapter!. First Prophercies are Evil, then Fortune Teller corrupted Shiro in Factions, she serves under Abaddon in Nightfall... Pleaaase, make a super-villian without any connection to the whole ,,fortune telling thing. - Abedeus 10:48, 17 February 2007 (CST) 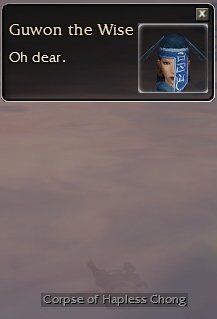 XD XD That's one of the best NPC one-liners I've seen in awhile...

One person in Party

If one member of the party has gathered all the quest items and enters the zone with three who haven't and completes the quest, the quest will be completed for all members. Old St Nicholas 02:25, 10 February 2008 (UTC)