Kind Of A Big Deal

From this GWG forum thread, screenshot link is (currently) near the bottom of the page. From the screen shot, all the words in the title are capitalized. --Rainith 01:56, 27 April 2006 (CDT)

If the last final form of this one would be having all titles maxed wouldn't that make it unachievable. I mean it is a title, and it couldn't be maxed until it's maxed, hence a perpetual loop. Does this make sense to anyone else? --Sneakysmith12 07:32, 5 March 2007 (CST)

Kind Of A Big Deal and Final tiers of titles 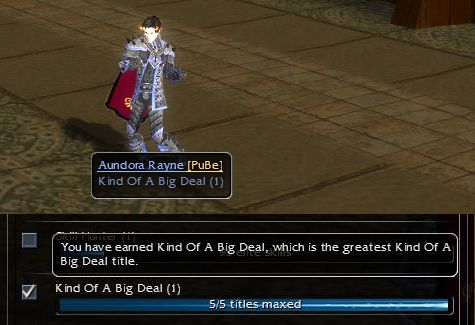 Eh. Someday I'll be seeing words like "awesomesauce" in the dictionary. That'll be the clue to start looking for another planet to live on. -Auron 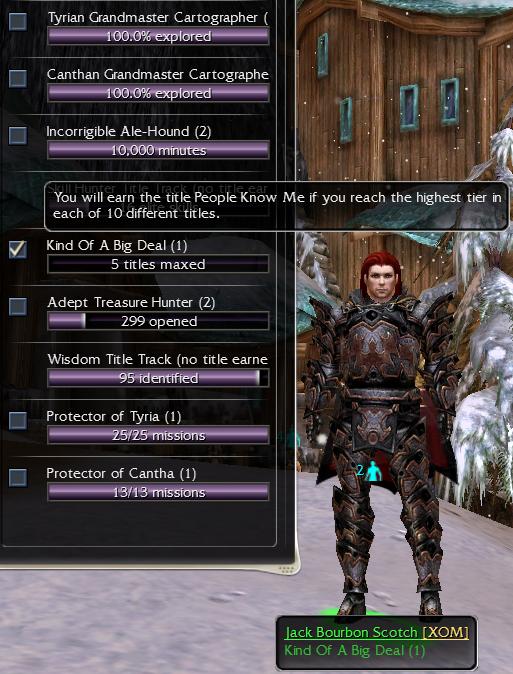 I'm guessing there will be a third tier as well, "I'm very important", seeing the quote..

Note: The content of this talk section has been moved here from Talk:Title --

if u needed prooves. it's being added by september 15th update

A question for someone - do the Account based titles, when maxed, count towards the Kind of a Big Deal title, or is it Character based titles only? I think this is a very important thing to include in the main article if someone knows the answer. - Heron

No Rank 3 in Kind Of A Big Deal Title Track

Please read this carefully, this is confusing. If someone achieves the max tier Kind of a Bid Deal title ( People Know Me) will that title count as a maxed title too ? COnfusing as hell but i just must ask Ieldra 11:50, 4 December 2006 (CST)

KOABD Across All Characters Now Possible

Just kind of bored, but as a bit of trivia, you could have KOABD across all characters if you were to have both kurzick and luxon faction allegience titles maxed, both charmed and hapless maxed, and skillz maxed. Unless there's something I'm missing.

And remeber, that Skillz is a PvP-title, it would be the first, that is maxable. Hero, Gladiator, Commander, all are not maxed (yet).

Yeah but friend of the luxons and kurzicks have been known to be maxed, so that's at least 3. If you really were lucky or unlucky it could be possible to be 4/5, at least 3/5 is posssible.

We really need verification that account-based titles are indeed counted towards KOABD for every character in that account.--Mira 05:52, 10 January 2007 (CST)

No on the next boardwalk event, these should be atleast some people who have em both.

Anyone actually have this?

Just have to know if anyone actually has the title, "People Know Me" -Nevermind didn't see the germanic (purepwnage reference) screenshot

The 2 faction titles are unrealistic, but I could see some people getting Golden and Hated within the next few events — Skuld 04:42, 16 February 2007 (CST)

Though unrealistic, it's actually possible to have the 3rd tier right now, since you can get legendary defender of ascalon and legendary survivor at the same time, but you'll need two accounts or a friend. Holymasamune 00:36, 14 March 2007 (CDT)

I am wondering what are your criterias for "doable", because all titles are doable since they have a finite number of ranks.

Pretty sure holy lightbringer is already achievable. Anyhow gaile mentioned in the past that they may split the skill hunter title in to different campaigns, if they do that soon that makes another 3 achievable max titles. --Lemming64 15:33, 19 February 2007 (CST)

If the skill hunter title were split Core possibly could also be another title making 4 new max titles but i think they will probably just have titles for getting every skill ineach campaign.DVDA 02:53, 24 February 2007 (CST)

You can't get both Savior titles.

My Apartment Smells of Rich Mahogany (5)

Unless someone has that in the real game (not beta test area), anything can change between the time ANet first thinks of the title and when they decide to release it. Holymasamune 10:14, 7 April 2007 (CDT)

I was going to remove it from the article, but because I know someone will just put it back in right away, I'll state my case here. Seeing something on a test server cannot be confirmation for actual ingame content. The test server is where Anet "fucks with the game". Excuse me for putting it this crudely, but devs obviously have the possibility to do so and they use it (there are currently only 24 titles in the game - of which quite a few can't be maxed by normal means. An educated guess would say you need 25 maxed titles for tier 5). Things you see there may never make it into the game or may be altered severely. You cannot take this for hard facts, they may just as well have completely made up that title. We don't add temporary changes from test weekends either, do we (and if I had my way, we wouldn't add anything from preview events either, in case we get more of those in the future)? --84-175 (talk) 02:15, 10 April 2007 (CDT)

Retrieved from "https://guildwars.fandom.com/wiki/Talk:Kind_Of_A_Big_Deal?oldid=789880"
Community content is available under CC-BY-NC-SA unless otherwise noted.