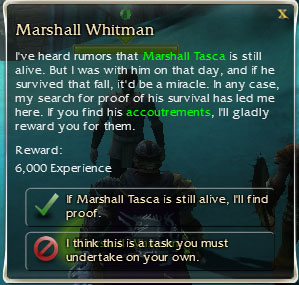 Warning:Nerd Alert!  :P
Nah, it's more like the Bajorans (sp?) from Star Trek, Marshall is their family name and it goes first. I think there are Asian cultures that have the same thing. --Rainith 11:53, 19 February 2006 (CST)

In that story, I gathered Tasca's is a marshal whose firstname is Marshall, while Whitman is another marshal. -PanSola 04:08, 26 February 2006 (CST)

I don't understand this whole debate. According to M-W, both spellings of the same concept are valid: here. So, I think it is obviously the rank. To say that Marshall is a first name and Marshal is a rank is incorrect. --Karlos 19:00, 26 February 2006 (CST)

I think the debate makes sense. Marshal(l)s were historically in charge of cavalry regiments. W(h)itman and Tasca seem more like Lewiss and Clark than military personel. — Stabber 19:19, 26 February 2006 (CST)

If you read the lore entry, it leaves no doubt that they are Marshalls (i.e. military guys). Therefore, given that that title can be spelled Marshal or Marshall, I see absolutely no reason to debate whether their first name could also be Marshall. Check the story, it says "two famous Ascalon marshalls" (small M). --Karlos 19:24, 26 February 2006 (CST)

Did you know that he is a senior fellow at the Democratic Leadership Council? Or that he was formerly a member of the Christian Coalition, the Heritage Foundation, and Sen. John McCain's Director of Communications? I bet Marshall's parents were such big fans of Guild Wars, they named their kid after a famous GW character. — Stabber 09:06, 23 March 2006 (CST)

Pretty fly for a lvl5 guy

I find it possible that Tasca and Whitman were actually names taken from some ANet employees, or maybe friends of an employee. I recently bought a book (Master of Chains) by GW's world designer, Jess Lebow. In the Acknowledgements page, there are two lines:

Retrieved from "https://guildwars.fandom.com/wiki/Talk:Marshall_Whitman?oldid=1148579"
Community content is available under CC-BY-NC-SA unless otherwise noted.