(Response to myself)What's more, I seriously doubt Anet would ever release a mini that rare to the masses just for a birthday. The reward for playing GW for 3 years is definitely not worth a pet which currently costs around 1500 ectos. That would crash the market in ways I shudder to think about.-American Wrath//Talk 06:44, 20 March 2008 (UTC)

Since we have that stupid Panda out of our way: http://wiki.guildwars.com/wiki/User_talk:Gaile_Gray/Third_Year_Miniature_Guesses. — Poki#3

what are the chances of getting a green or gold??? i'd like to know

This is purely conjecture, I have no first-hand knowledge of the code behind Guild Wars. It's a common thing in computer programming to "seed" random number generators (RNGs) with the current system time (reference @ Wikipedia). This makes the generated numbers not truly random, but random enough for most general purposes. It also means that if two calls are made to the RNG at the exact same time, the exact same number will be returned to both. This is highly unlikely to occur, though, since the RNG will usually use a precision of milliseconds when it gets the system time. So for this situation, it is possible, however unlikely, that the Birthday Present RNG was invoked at the exact same millisecond by both of them, which would give them both the exact same present. —Dr Ishmael

Ok... now let's all figure out how to get a green mini every time! RoseOfKali

That doesn't appear to exist.

What's so confusing about it? --Ab.Er.Rant

So she has a frog. Cool.

Well, we didn't know about it. Gaile doesn't talk to us.

I took care of it. Thank you for letting us know!

It's possible, that it'll be the 3rd year green mini. We'll have to wait and see. — Poki#3

WTF? O_o It looks just like the frog under the tree near old Xunlai Storage area in LA, or the frog in the bog area of Scoundrel's Rise, or many other frogs everywhere in Tyria. Are you sure this is real? O_O RoseOfKali 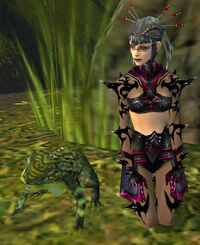 See? I have one too! XD RoseOfKali

Someone in Kamadan had one, so I took some screenies (w/permission ^^). Cropping them, will post again in a moment. X Deity X

What rarity is it?

Ok, I was told it is white. X Deity X

I didnt get a chance to take a picture but there was a miniature muursaat in temple of balth a few mins ago.

Yellow Icon + Yellow Background = what is that? — Poki#3

Pulpulpullie reverted it back (but added in the Celestial Pig icon too). Anyone has any idea how can we make the icon visible and keep the transparent png? — Poki#3

Wrap the image with <div>s that specify a different background? I think a gray would work best, something like: (top uses #999, bottom uses #666)

The title of the image column would have to be shortened to "Icon", otherwise the bg color fills the whole width of the cell for some reason. —Dr Ishmael

As at least a temporary fix, I'll add a background to the images since they're only on the Miniatures page anyway.

Actually, that didn't work. But a center tag makes it look less hideous.

What a fucking Ripoff

They only made Mad King the green because Gaile Gray wanted it. She already has an exclusive miniature, but they felt they needed to ruin things for everyone one last time in her name.

Yeah, cause not getting a Mad King mini just TOTALLY ruins things for everyone. I mean, I don't know HOW I'll cope with maybe not getting one. Oh, wait, I'll cope the same way I coped with not getting a bone dragon-by realizing that it's only a little decorative item that DOESN'T DO OR AFFECT A GODDAMN THING. Yeah, somehow, I think if I can do it, you'll struggle through it as well. Be brave. DKS01 22:27, 26 April 2008 (UTC)

What are you talking about? No one wants Mad King, it's stupid.

By the transitive property, that makes you "No one." Congratulations.

I have 17 charaters on two account (+4 char on my storage), and none of them ever had a gold nor a green miniature as birthday present. My oldest one will have it's third present in about a month, i wonder what it will be this time. TulipVorlax 05:49, 27 April 2008 (UTC)

Only if it was larger than the player.

The gallery has grown to be pretty big. I was thinking that it would be good to move it to a sub-page (like Miniature/Gallery) and just link to it from here, similar to the Hero armor galleries. — Poki#3

Different suggestion: nuke the gallery completely? The list of miniatures already include images, is on the same page, and in fact is right above it. Having the gallery seems unnecessarily redundant in my opinion. -User:PanSola (talk to the

Yes, that's also a possibility. Miniatures look exactly like the mobs themselves, and we have pictures of those already. (though some are still a bit low on quality, like the Black Beast) — Poki#3

What Poki said - they're the exact same model/skin, just reduced in size. People can go to the creature's page to see what it looks like. Hey, that means I can delete all the gallery images! Yay! —Dr Ishmael

OK then. I'm wielding a Article Destroyer Axe of Galleryslaying! (and placing delete tags on images, though I'd leave them around for a few days in case someone would like to do something with them...) — Poki#3

Fine, I'll allow them to escape my delete-mallet for a while, then. :P —Dr Ishmael

To be clear, I think the icons in the miniature list should be kept. I was only advocating the gallery itself to be axed. -User:PanSola (talk to the

Except that most of the mini pics were of the mini only - there was no point of reference to figure out relative size. —Dr Ishmael

Most = all. Yeah, a pic that would show the mini size would be nice, but it's hard to make them stay in place, and player characters can vary in sizes too, so it would have to be a big community project with people that would take pictures by some obvious landmark, or all the pictures would have to be taken by the same character... — Poki#3

And they'd have to take their armor and stuff off to avoid "glammer shots," and anyone with a Mini Vizu is too fatheaded to put up with that.

If the magazine is sealed, I don't see any reason why not.

The bug is about it affecting several things. The part about Leadership is an exception to the bug. ---

"Bug! Although they are ignored by Leadership, miniatures do count as an ally of the owner's party for many skills and can be hit by AoE effects." Thanks for clearing that up, but it still begs the question. Lacking any evidence that they're not supposed to be affected by AoE effects, what reason do we have for calling it a bug? It's just observed behavior unless we have some official statement somewhere saying miniatures are not allies and aren't affected by AoE effects. --68.187.147.210 00:35, 29 April 2008 (UTC)

They don't appear on the radar. —Dr Ishmael

Do PvP only characters get birthday presents too? —The preceding unsigned comment was added by 75.166.50.69 (contribs) .