Bad skills are there so we aren't all using the same build and so people can learn - they won't start from the best builds and go no-where then. They aren't all useless, most ppl thought ignorance and.. other example don't come to mind; were useless but they do have their uses in certain situations — Skuld 11:51, 25 September 2006 (CDT)

There is no such thing as a bad skill. There are only bad thinkers.

No, there ARE bad skills, that Anet knows are bad when they make them. There HAS to be bad skills in any game like this, not every skill is awesome for real thoughtout reasons. This "no bad skills" arguement came out with Magic (the card game) years ago, someone asked why some cards are just clearly worse than other cards. The response they gave on their F.A.Q still applys today and applys to any game where there is a base of cards/skills/etc and you use a limited number of them. I'll just paraphrase, but basically the top reasons were: 1) here are bad ones so that newbies can learn they are bad and get good ones instead (adds indirectly to the learning curve), 2) There are ones that are bad, but have "novelty" to them, cards/skills that might not be tournament level, but if you are just playing around with your friends you can make a fun deck/build with them, there are many skills like this in Guild Wars - just to play around in RA with, 3) There are ones that in the designing process SOUND decent but after its balanced, developed and released they actually find out it isn't all that great (related to Guild Wars, I can see where the new E-mangement with signets might SOUND ok on paper...but fail in the actual game). - Former Ruling 18:56, 7 December 2006 (CST)

Don't be snide. This skill has clear, mathematically representable weaknesses compared to Mantra of Resolve. Let us begin with qualitative rather than quantitative differences: Mantra of Resolve is a stance, Persistence of Memory is a enchantment. Except in the extremely notable case in which one depends upon another stance such as Distortion, or when one has some skill-specific desire to be under enchantments, an enchantment is somewhat less desirable than a stance, as it may be removed by a wider variety of means and at greater personal expense. Now, the quantitative problem. Persistence of Memory may be seductive because it is in the Fast Casting line, which most Mesmers already use in their builds. However, whereas PoM lasts 17 seconds with 12 Fast Casting, Mantra of Resolve lasts 30 seconds with 0 Inspiration Magic. Now, in a battle scenario. The spell which the two spells in question will be protecting can be any spell, however persumably it will be worth more than 5 energy, as it is unlikely that a caster will invest a minimum of 10 energy to secure their Flare or Wastrel's Worry. The spell cast will be spell "S", its energy cost "E", and its cast time "C". The function "Fc(x)" will represent the fast casting modifier. Let us assume one interrupt, as it is the most flattering to PoM:

Energy-wise, MoR is less than or equal to PoM, when E is greater than or equal to 10, which should be almost always. Casttime-wise, MoR is always shorter. Plus, although I have not tested this, it is highly improbable that this spell will nullify the disabling effects of Psychic Distraction which might give it some practical application which MoR can not match. I am completely open to criticism of my analysis here. Seva 14:04, 25 September 2006 (CDT)

Like I said, bad thinkers. This skill is to counter skills like Psychic Distraction and Blackout, not regular interrupts. You can't use your 'flare' or 'wastrels worry' (which are bad examples since they cast almost instantly and have extremely short recharge times anyway) when they are disabled.

Is your claim about Blackout and Psychic Distraction proven by test? If so I will concede the value of the skill for that scenario. However, the idea that this skill could counter Blackout does not make any sense given that Blackout "interrupts" via disabling, and the interrupt is a side-effect of that disabling in the event that a spell happens to be in the process of being cast. The possibility of countering Psychic Distraction is more feasible given that an interrupt actually occurs, and that its disabling side-effect which happens to be independent of the interrupt and not dependent on its success. Persistence of Memory, as described, would counter skills which "increase recharge time by X," and have nothing to do with disabling. If PoM invalidates disability, that is highly notable. If it is not confirmed by test, the note you added to the skill description should be removed. Seva 16:12, 25 September 2006 (CDT)

While needing another stance, e.g. Distortion, is far more common than you seem to imply, I do agree that in general Mantra of Resolve is far more valuable than Persistence of Memory. To Chuiu: Blackout does not interrupt directly; skill failure due to disable/recharge is merely that. Neoflame 15:49, 25 September 2006 (CDT)

To be honest I didn't test blackout, I thought it interrupted in addition to disabling though.

I infer that you have tested Psychic Distraction then? If this skill cancels the 5...11 second disability from Psychic Distraction that should definitely be mentioned specifically, since its a pretty important paradigm shift from recharge time and disable time being independent. I can add it if/when I get your confirmation. Seva 11:12, 26 September 2006 (CDT)

By which logic, it would then defeat the final, and desired, effect of Psychic Distraction, which is to make a skill have a long recharge time, to shut it down for a while. If the skill takes X seconds to recharge (for example Light of Dwayna), and gets interrupted by Psychic Distraction, then the recharge would be X+16 (or whatever the relevant time is). If you are under Persistence of Memory, then the skill would be interrupted, yes, but it would recharge instantly, which would then allow you to cast it again. Against 1 sec cast time skills, this means you can still effectively cast it immediately, and get the desired effect on target ally (or target foe). For longer casting time spells (those of 2 seconds or greater), then the incredibly short recharge of Psychic Distraction would be the winner, as not only would you get interrupted the first time, and lose the energy, you'd also then get interrupted the second time, losing the energy again, and getting the skill disabled for an additional period of time... Personally, I think this skill is more of a counter for Power Block, but only when using a vital skill... - Patch of Celestia 16:30, 22 October 2006 (CDT)

The use of this skill? It prevents interupts of spells, without you loosing energy, and it even gives you another useful effect. --Curse You 16:11, 3 January 2007 (CST)

Oh yea, it doesn't say anything about preventing interupts... whoops. I guess then this skill is limited to low cost spells that are prone to interupts, while not having to put points into Inspiration magic. --Curse You 06:57, 4 January 2007 (CST)

Knockdown is neither an interrupt nor a form of skill-disability. It's a Knockdown. Just like with the mechanics of Block and Evade - they're essentially both the same, but they have different counters. In this case, the counter to interrupts is anti-interrupt, and the counter to Knockdowns is anti-Knockdowns. (Terra Xin 00:28, 25 January 2007 (CST))

The more i do think about it though, this skill honestly does suck. To get a decent duration for this skill, youd have to put points into fast casting. The higher, the fast casting, the less use this skill has. Alot of mesmer builds usually use fast casting, but mesmers are the least vunerable to interrupts. Not only does it not compare to mantra of resolve, (you lose energy for recasting interrupted spells), but the energy cost to maintain this is pretty high. Mesmers skills got nerfed recently, they seem to be pushing for interrupts. I was hoping the fast casting skills would get buffed, but i guess not. I find mesmer fast casting attibute to be very versatile. 68.226.178.120 00:19, 2 February 2007 (CST)

Exactly. Use Signet of Illusions to turn Symbolic Celerity into Illusion rather than Fast Casting. Zaq 15:45, 9 February 2007 (CST)

I wouldn't recommend this. You're effectively investing 3 skills which includes a secondary elite, just to prevent the recharge penalty of interrupts? You're better off sticking with mantra of resolve. (Terra Xin 08:15, 13 February 2007 (CST))

WOW I was thinking the exact same thing.Aside from the person in the icon, look at the thing in the background. It looks like that liquidy thing that guides you to your future (in the movie)--Bloo Kazoo 02:22, 3 June 2007 (CDT) 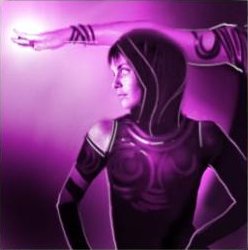 Hmmm. Looks like that Dark Brotherhood armor from Oblivion to me. Ha I still have that ingrained in my brain... why? Qing Guang 03:18, 26 November 2008 (UTC)

Go read the talk page, everyone there agrees persistence is vastly inferior to MoResolve except when you need another stance (or if it would counter PD/Power Block, which seeems to be not the case). Plus your rv note is totally bogus: MoResolve will not make you lose activation time (since the spell succeeds, unless you run oom), and if the old note pointed out the benefit of not incurring recharge then thats 1. obvious and 2. still not better than having your spell succeed in the first place. 134.130.4.46 10:02, 7 July 2007 (CDT)

I did read the talk page. The note described exactly the situation where it might be considered superior, spells with low energy and long recharge. You lose the cost of the spell, but if that's 5e, you'd need to spec a lot into resolve to achieve the same. You don't have to worry about this failing due to energy. Since you're a primary mesmer anyway, you'll likely already have points in fast casting. --Fyren 16:45, 7 July 2007 (CDT)
If you had added that back (or sth like what 134.130.183.235 has done now), I wouldn't have minded. But you did remove the reference to MoResolve (which IMNSHO is the more important thing to note here). And with a still bogus revert notice. Please take the time to consider the merit of an edit before going trigger happy on that revert button. 134.130.4.46 11:16, 8 July 2007 (CDT)

Why does this not have a LAME tag?

This skill is awful. It's a disgrace to Dali. I've never seen a more counterproductive skill. It's in FAST CASTING, which aids in preventing skills from being interrupted. Dare I say it, this skill is worse than Balthie's Pendulum. --Heelz 07:13, 20 September 2007 (CDT)

I'm sure this skill deserves it. I'll add it when I see other people agreeing. What I'm really wondering is why this doesn't have one already. --Heelz 08:47, 20 September 2007 (CDT)

Because me and Entropy don't notice everything, and not a whole lot of other people add the tag :P Just go ahead and add it, it obviously deserves it --Gimmethegepgun 08:49, 20 September 2007 (CDT)

Can be considered unlinked skill

With a 5 seconds duration, you can still use it with other professions and activate it when you use the signet since it's a stance. Like Signet of Judgement and then ativate Manra Of Signets. This allows you to use 3 times SOJ within roughly 10 seconds.Big Bow 17:20, 22 February 2008 (UTC)

Retrieved from "https://guildwars.fandom.com/wiki/Talk:Persistence_of_Memory?oldid=1413838"
Community content is available under CC-BY-NC-SA unless otherwise noted.