Start a Wiki
"This quest will lead you the area close enough to the entrance of the Frostmaw's Burrows dungeon."

This should be noted somewhere. Genders now not only makes a diffrence in the appearance. You have to aquire quests in diffrent locations...didn't think Anet will do sth. like that O_ô —

Eh, it's only just slightly harder on males than it is for females. They get to zone into the relevant outpost and cash and collect quests without risking life or limb running to the questor. That said, males get the advantage of being able to pick up a handful of Norn points en route every run. --Glommon 22:38, 20 November 2007 (UTC)

I'm reverting a recent change from "gender" to "sex" in a couple of places as the change was inconsistent with modern English usage of these terms. The editor's summary merely says "sex != gender", which isn't always true (definition 3.a. in my dictionary says that's exactly what "gender" means), but more often than not it is (note I had to skip down to the third definition to find them to be synonymous). Since under definition 3.a. the words would be interchangeable, I was tempted to leave it as is, but after consideration I think it really needs to be reverted because, as I agreed, in general "sex" does not mean the same thing as "gender", and in this case, the term "gender" is actually the more appropriate usage. In a biological or medical context, "sex" would be the more appropriate term, but here we're talking about a cultural/social context, and in this context, "gender" (referring to "sexual identity in relation to society or culture") is the more accurate term for what the word's being used for in this context. --68.187.144.197 10:45, 5 December 2007 (UTC)

I agree with this rationale. "Gender" is the more appropriate term given this context. --

As the contributor who actually added the "by gender" text (see edit made 02:24, October 20, 2007 (UTC)), in addition to the points made by 68.187.144.197 (BTW, thanks for having already corrected the page), my other consideration was that the word "gender" was far less likely to attract the types of trolls that see the word "sex" and cannot resist the urge to vandalise an article to add some inappropriate comment, sad that have to consider such things, but that's the joy of a public wiki. --Wolfie

I do agree with both of you that gender is the more appropriate term for this context. That being said, I think it is important to distinguish gender from sex, in this era of society, so I would prefer to use the terms as literally as possible even where semi-inappropriate, so that the distinction is emphasized. Emphasis is important to spread awareness that the distinction exists to begin with. When I get a survey asking me for my gender, do they really mean gender? Maybe if we pointed out this distinction more, this would be clarified to more people. Calling it gender---appropriately or not---is dodging the issue. This isn't really a place to make a stand on an issue like this, but having this discussion here is important at this stage for most major worldwide societies. A few years from now, this kind of discussion will, I hope, be entirely unnecessary, and I wouldn't imagine contesting calling it "gender" (which, again, I do feel is perfectly appropriate).
That being said, I would insist on referring to the sex of my Role-Played character, not her gender, which may very well be entirely different. I know for a fact that my elementalist is male by sex, but female by gender, and my assassin is exactly the opposite. This suggests that a properly Role-Played character will need both sex and gender, and the article would thus certainly be referring to sex. There isn't exactly much Role-Playing going on openly in GW, but it's hardly nonexistent, given the abundance of paragraphs of character histories found on guildwiki userpages...--Carmine 05:27, 6 December 2007 (UTC)

easiest way to kill the elite 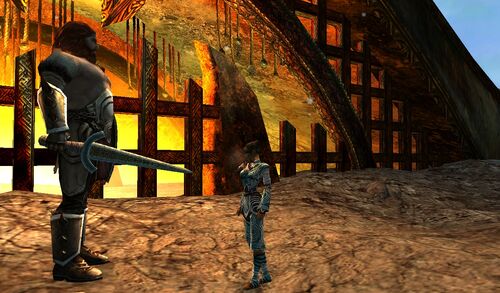 Maybe he's really small after all, you know, with the rest of his body so large...? Maybe? ---

You know what they say about big men...
...they have to wear big shoes. —Dr Ishmael

Aha! So the oversized and strategically placed sword is their version of the Hummer: gross overcompensation? (PS sorry about the image size; it was my first time posting an image. Also, this is Ailina posting from my phone.) 66.174.93.55 15:22, December 16, 2009 (UTC)
Heh, in Latin, the word for a man's, um, yeah, was called a Gladius, which also means "sword" in Latin. The literal translation of a woman's, well, would be a "sheath" - except English has retained the Latin spelling and pronunciation for the actual word.

Retrieved from "https://guildwars.fandom.com/wiki/Talk:Prenuptial_Disagreement?oldid=1532937"
Community content is available under CC-BY-NC-SA unless otherwise noted.