When a ranger attempts to charm a rabbit, does it complain invalid target, or does the rabbit remain uncharmed after the skill casts fully, or some other kind of failure? -PanSola 01:08, 10 December 2005 (UTC)

"It has been theorized that the rabbit exists as a nod to the cult-comedy movie Monty Python and the Holy Grail which has a vicious rabbit in one scene."

I think that should be deleted as unfounded speculation. Or if it does have backing, state it. --User:Number Theory 20:48, 5 January 2006 (UTC)

The rabbit in the movie is white, isn't it? --User:Tetris L/Sig 07:16, 6 January 2006 (UTC)
Seeing as they have several Holy Grail references already, the most recent of which being The Knights Who Say Nian, it wouldn't suprise me if this was another nod in that direction. Tsukan

I think this is a better reference for situation at hand...http://en.wikipedia.org/wiki/Isle_of_Portland#Rabbits

Maybe this rabbit is the source of easter eggs in the game.

Found along the main road from shing jea to tsumei about in the middle and slightly south of the road, N/NW from Ronsu, past the mountain. Is it just me... or did these things just "pop" up recently?

What I saw was for the ranger secondary in factions, please delete this and my previous post.. sorry >_<

That rabbit has a mean streak a mile wide!

Of all things seen to drop a tribal blade.

Can't you see? Obviously the rabbits are planning a revolt against all of the ppl that tried to kill them in past campaigns (and phailed). And he thought he could get away unnoticed with tht tribal blade sticking out of his fur... stupid rabbit, planning visciously brutal rebellions against people that you hate are for kids.--

appears area is no longer accessable. was blocked off this morning when gwen went live. had finished the quest during the preview. could still see the rabbits and chests down there. just no way to farm the spawns for faction Palewook 12:12, 31 August 2007 (CDT)

wtf? this isn't a reference to anything but Monty Python!!--

I disagree. I think it is both a reference to Python AND Alice and perhaps some other more obscure bunny references. Just a note: I did not write or add the Alice in Wonderland bit, merely modified it in an attempt to make it easier to comprehend. I also removed the original posters Disney blurb because I would be willing to bet real-world money Anet was NOT thinking of Walt Disney when they decided to put the bunny there. --

Could this possibly be a reference to the Matrix, where Morpheus tells Neo to "Follow the White Rabbit," resulting in his eventual capture by agents? I didn't add it yet, but opinions maybe? --Joseph Leito 15:25, 19 June 2008 (UTC)

Well, the matrix reference is from Alice in Wonderland, and that's already mentioned, so I don't think it's fully necessary. --JonTheMon 15:28, 19 June 2008 (UTC)

Funny, I could swear the Matrix was mentioned the last time I looked over this article. I agree that it's not necessarily necessary though.

That page needs a pic of the ambient crabs in Dajkah Inlet. I'd get it myself, but I'm trying to do biology homework... If it isn't up tommorow I can go get it. I'd also say the rabbit is ambient. --Shadowcrest 00:10, 18 September 2008 (UTC)

The white rabbit is not; it can be targeted and will turn hostile and attack you once the Vaettir spawn. White rabbit should probably get its own article, all things considered.

The White Rabbit should indeed have its own article, as it is called "White Rabbit" instead of just "Rabbit". —Dr Ishmael

In general video game terms, being able to "interact" with an object simply means you can do something with it, that it's not just part of the scenery. In this case, you can target the Rabbit, which displays the name "Rabbit" under it and also allows you to do things like Ctrl+Space = "I'm talking to Rabbit!" You couldn't do this with truly ambient features. Because the Rabbit is targetable and has a name, that makes it an NPC. —Dr Ishmael

You can't really do anything with it in the sense that anything happens in the game world. It rotates when you talk to it (looks eerie). So I agree it's not ambient. Should it go in the "domesticated animals" category then? --◄mendel► 09:46, 18 September 2008 (UTC)

We have one of those? Aha. No, it shouldn't go there because it's not domesticated - it's quite definitely wild. —Dr Ishmael

It's a domesticated rabbit that wasn't cared for properly by the children, so the parents said to put it out in the wild, but being domesticated, it is now totally helpless and sits in a state of paralysis on the meadow all day. No wild rabbit sits still like that! --◄mendel► 18:02, 18 September 2008 (UTC)

well its obciously not an ambient animal, you can target it, unlike the Cows(although i hear you can kill them if theyre in the right spot with AoE spells) in Sunqua Vale, or the Cat that sits in Kaineng!

Or the chicken in Tarnished Haven! Yes, you can kill cows in Sunqua with Flame Burst for example. It's quite funny.

Vampiric Assault is listed as one of its attacks, but I don't see an offhand attack... --

Maybe it hasn't been observed yet? *shrug* Maybe he uses one of those "counts as an offhand attack" type skills that people haven't noticed yet. I haven't gotten this summon yet, so can't verify anything, but I'll keep this in mind if I do roll one. RoseOfKali

its listed in the green rarity array at the bottom of the page, but i think theyr actually of gold rarity. i got one today and its text reads gold, so methinks it should be changed. im just one instance, so i wont change it until i get someone else to verify. Althena eris 21:26, 11 June 2009 (UTC)

If you could take a screenshot and upload it here, that would be great. (Just in case you don't know how to do that: Press the Prt Scr button in the game, and the file should be added to your Guild Wars file under screenshots. From there, press the upload button on the left hand side and select the image.) Thanks for the info!--

It's listed as gold on GWW too, so I will go ahead and change. RoseOfKali

Thanks a lot for catching that mistake-- 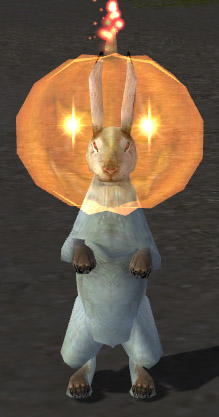 Lol. Brilliant. Those things are hilarous with tonics. You know just how ridiculous a Mursaat looks with that?--

I thought I had screenies, but I apparently forgot to take some.-- 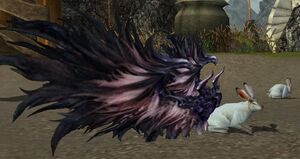 I find the placement of those wings... questionable. >.> Nwash

What do you care when you very much look like a carrot with a dollop of Ranch dressing on your head? :D RoseOfKali

I believe there can be only one response to this: o_O Nwash

Well, a rabbit with demonic wings growing out of its ass doesn't seem like something you'd want to mess with, does it? ^_^ RoseOfKali

Wings make everything over 9000! You're just jealous. RoseOfKali

Retrieved from "https://guildwars.fandom.com/wiki/Talk:Rabbit?oldid=1595772"
Community content is available under CC-BY-NC-SA unless otherwise noted.