Is the tip for the one "just south of Vlox's Falls" referring to the one that's actually southwest (slightly northeast of the words "Arbor Bay" on the map)?

Haven't gotten any of them yet, but is there no cipher of grenth or is it just not a pre-req?

Anyone ever seen or heard of "Ventari's Haven" referenced in the article? -- Glamtre

It's where Ventari is, with several other NPCs. It has no official name, but Ventari went there to create a haven, and thus, Ventari's Haven. --Kale Ironfist 22:41, 15 October 2007 (UTC)

Has anyone actually done this quest multiple times? I don't think all the ciphers have multiple spawn points and even if they do, it may be set. Maybe I've gotten some weird odds on this quest but the times I've done it, I've gotten the same location as the guy at the official wiki discussion page page. 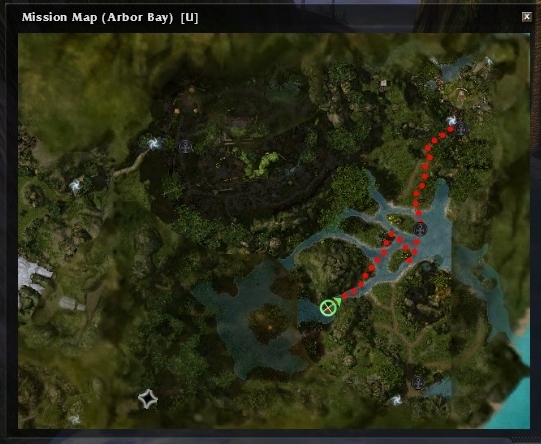 I found one in the bit of water that juts up, just due south of Vlox's Falls, so there are definitely multiple spawns. (I can post a ss of my map if you want.) Muchrejoicing 21:26, 13 January 2008 (UTC)

I found it in the same place as PlacidBlueAlien, but after seeing Muchrejoicing's post, in the future, I'll keep zoning until it spawns at that point. Most of the quests in this chain have only a few spawn points, but my attempts to map them on the article pages have all been met by reverts by people crying "random"... who can't fathom that it might be an (apparently) random selection from only a few possible points. --War Pig5 18:18, 17 March 2008 (UTC)

Would it be appropriate to put something like this under Walkthrough or a Notes section? "Simply rezoning into a Facet's area changes it's position, so it may quicker/easier to rezone a couple times until the Facet is close by." Cloudchaser1 21:31, 9 March 2008 (UTC)

Done. The sentence I added is generic enough to be pasted into the walkthrough of any facet quest that this technique works for.--War Pig5 18:28, 17 March 2008 (UTC)

I suggest following the Nightfall Storyline if you have Nightfall. Or perhaps look up on the Kormir article :P ---

According to this anon you don't have to turn in the rewards of the previous quests for this quest to become available. But since you still have to do the other quests, I didn't think it really mattered to note it in the article. Still its quite strange if it's true... Lยкץ๒๏ץ talk 12:55, 19 May 2009 (UTC)

With the new ability to choose what quests you turn in, I can see where this may be possible now. I'm not sure I have any characters that can verify it, though... I believe I may already have done this quest with all of them. Nwash 15:13, 19 May 2009 (UTC)

I can verify it. I did the previous 4 ciphers, but haven't turned them in, and this quest became available. I took a screenshot, but don't know how to upload it. --

Arguably, Kersh is only asking you to nail the other ciphers (he doesn't seem to care if you complete the quests), so it has some rationale (there are a few quests that require starting a pre-req). However, I'm not sure why you would want to forgo the quest rewards from the ciphers unless you are planning to VQ the zones in which they appear later.   — Tennessee Ernie Ford (TEF) 22:13, December 17, 2009 (UTC)

Retrieved from "https://guildwars.fandom.com/wiki/Talk:The_Cipher_of_Kormir?oldid=1618256"
Community content is available under CC-BY-NC-SA unless otherwise noted.