During a screenshot-session down at the Foundry, I have noticed something pretty bizarre ... my minipet Siege Turtle also screamed "Aaaaarrrrrrrrggghhh!" when I was affected by this skill. Here's a screenshot: [[2]] I don't suppose having a minipet out reduces the chances of having another human player swapped out, would it? Just for the note, two other players in our team also had minipets out as well. I think more testing is in order for this ... I just find it really weird. On a more fortunate note, we survived the onslaught despite having 6 people in the party and I got myself a yellow, shiny Titan Gemstone out of the deal. ^_^ --KirinRiotCrash 11:44, 31 March 2007 (CDT)

Not a Touch Skill 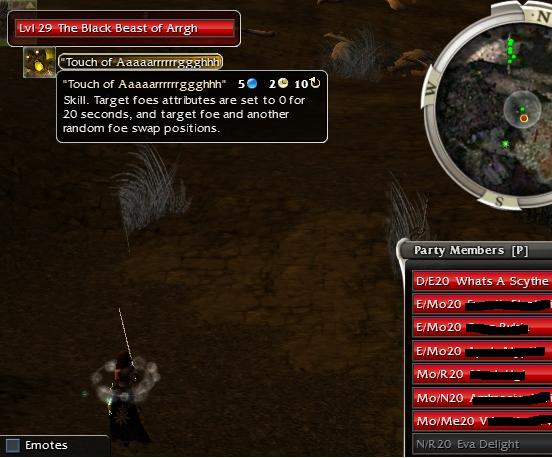 With the recent sunspear/faction skills update, im curious if this will render them to the lowest title value, or will it be considered not an attribute, and therefore be left at its original value. Any1 test? --Idiot 01:55, 17 June 2007 (CDT)

I would say they are attributes for purposes of those skills, as they are listed in the skills panel as such. For the example proposed above, I'd say they'd be rendered to the lowest title value (0 in the title). --Kale Ironfist 05:36, 17 June 2007 (CDT)

From experience when using Ursan Blessing I know that if I get this skill hit me, I instantly drop OUT of ursan. This could be because I've 'hit rank 0 on norn' (I personally doubt this) or it could be due to some other factor, such as my energy storage dropping to 0 (I'm an elementalist). I can't make something conclusive of this, but it might give people more of an insight as to what happens with this skill. (Yu Takami / talk) 23:49, 22 February 2008 (UTC)

No doubt about it this has to be one of THE coolest skills ever that you'd never want to be hit by. So Cool or Evil? Fusco

I just discovered this skill & the related monster today. This is one of the best/funniest references in the game to one of the funniest movies ever. This skill's Python-esque effect is equally amusing. - insidious420 17:09, 8 May 2008 (UTC)

Retrieved from "https://guildwars.fandom.com/wiki/Talk:Touch_of_Aaaaarrrrrrggghhh?oldid=1535265"
Community content is available under CC-BY-NC-SA unless otherwise noted.