Joins When Leaving an Outpost, You Say?

I saw him first outside Grothmar Wardowns, but he didn't give me any quest at that time. Later he always shows up as an ally if I have a quest in the area active. But now that I completed all ebon vanguard quests (except the one given by Vael), I can't find him anymore to do the 3 skill quests started by him. Any idea how to trigger him? 04:36, 3 Septemeber 2007 (PDT)

Is Captain Osric's first name "Nathanael"? Because that's what Captain Langmar calls Vael in the quest Plan A

I like to pretend that he is, but it's hard to justify it if you can use that skill while Vael's fighting beside you (joining randomly in Sacnoth Valley.) --Valentein 16:53, 3 September 2007 (CDT)

I thought the "V" was a V for Vendetta reference. He's all badass and everything...

When i first encountered Vael, it wasn't at the usual spot outside Longeye's Ledge, but at this location: 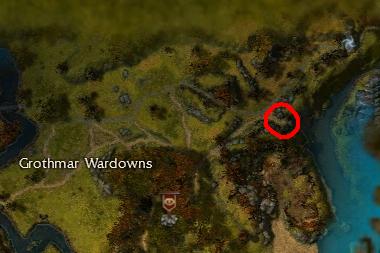 He had the same dialog options as at the other place, and after leaving the area i checked up on the wiki and found out about the rabbit area. The problem is, he now doesn't want to spawn anywhere, not at the rabbit spot, where i found him before or where he gives out the quest, which i now cant get at all. if anyone else has had this problem please post. --Milkflopance 17:19, 3 September 2007 (CDT)

I can't get him to spawn outside near the rabbits and I've completed all the primary quests. Ideas?

He never spawned near the rabbits in my case (spawned at charr camp instead, but that is unimportant, you don't need him to spawn somewhere first, he won't give you quests at that point anyway). As I said, go for the quests given by Captain Langmar. You'll meet Vael in the process and he'll give you new quests himself. Perfectsam 23:17, 3 September 2007 (CDT)

I've completed all of captain langmar's quests, and all of the primary quests...have talked to vael before now but he never offered quests when i talked to him the once...anyone seen him after primaries AND capt Langmar's quests are done?

Im having a Promblem with him, I completed all Primary...twice. I also Did gwen missions and most everything and all he wants to do is run around with me. I kept him with for AWHILE. Please help!! Its killin me I already have all Carvings. TY. Sorry for posting here NCsoft page never loads.

I have found a third location for his spawn, (Have primaries done and the ones done by Captain Langmar). For me he spawned just west of the mission complete marker Flag. I will post a picture of location as soon as I get around to hosting it. Perhaps his spawn is random within Wardowns, or at at the very least constrained to a certain number of locations.152.8.182.110 19:26, 4 September 2007 (CDT)anonymous

I first encountered Vael in the rabbit area. He did the whole "Strange whispering" and "voice in the bushes" thing. Talked to him then. He didn't have much to say, other than that his favourite color was sage green. I've not completed all of the ebon vanguard primary quests, and all of the quests given by Langmar. But Vael's still not showing up anywhere. Ideas?

Read again what i wrote above. And someone should update the article. This is not a bug. You should just finish all Primary Quests. Then you'll meet Captain Langmar who'll give you quests that involve Vael. And Vael will give you new quests himself. Perfectsam 13:09, 5 September 2007 (CDT)

I've finished all of the primary quests and Vael still will not appear to offer his quests - I've only seen him appear the first time. /bug

You have to go find him to start his quests, and to give his first one (Be Very, Very Quiet...) he's in the middle of Grothmar Wardowns. Look at the map in that quest's article for his exact location. Tain 18:05, 15 September 2007 (CDT)

I found Vael in another location. I have not completed the Charr part of EOTN. After getting all the strange whispering and other lines, he spawned (as a first encounter, not giving any quests) at the res shrine just north-west of the forest.---- Tyrial 15:21, 16 June 2008 (UTC)

Listening to him recount the time his beak fell off while training with the Tengu is indeed, one of the best quotes I've seen so far. --

He's MUCH more mysterious than the Master of Whispers... no contest. And yeah, he's Captain Osric. I just know it. -Alreajk

Every time he mentions his false eyebrows, I think of FLCL... anyone who's watched the series knows who I mean. :P --

For all those still with a shadow of a doubt, here you go:

What else is there to say? He saw a pair of daggers and decided they were the best chick magnet he's ever seen. He then snuck off to Shing Jea and was a little disappointed after the Assassin armor crafter booted him. He did manage to fool the Tengu to learn wielding his new daggers, since the Skill trainer laughed him off as well. And, since there was no Vanguard back in the old days of Ascalon, the V must stand for Vael, which was his Academy nickname. Sound about right? :) RoseOfKali

Lol, your theory sounds ...almost... believable except the fact that Sergeant Weststar could be Vael too! Or here's another theory: ArenaNet is too lazy to give those npc's different skins and they think we won't notice it :-P — Perfectsam

Wrong about there being no Vanguard in old Ascalon... remember Pre? Academy mission was all about joining Ascalon's Vanguard. Tain 15:09, 11 September 2007 (CDT)

All I can say is "!!!!" (like MGS but more visual) And that says quite alot. This guy is also Your average joe pop-out-of-nowhere-get-monsters-owned-with-protspirit-and-SoA-dies-pretty-fast-without guy. /dies after going blue Flechette 05:59, 15 September 2007 (CDT)

Or what if they're just all twins? *GASP!* We should organize a family reunion! =D

I dont rly think he is anyone. He is just himself. As since Captain Osric and Captain Greywind and Frostmaw the Kindslayer are all happily allive and running around ik their camps, towns and dungeons he might just be someone entirly new. Or maybe he is Gwen's long thought dead dad, who ís actually allive. Maybe they're all just wielding the armor from the same Armorcrafter and they go to the same haircutter. Never seen a haircutter in GW though. Well, only future can tell, or not. Eddard of Ascalon 20.47, 18 september 2007 (GMT)
And he says himself that "Nathanael" is as much of an alias as "Vael" is...Hyper Cutter 18:57, 22 September 2007 (CDT)

I am pretty sure he DOES get death penalty. After a few deaths in Sacnoth Valley he neede a protective spirit to survive a 100-ish hp blow from a Grawl. Further research required.

Vael was unlucky enough to spawn with me in Sacnoth Valley. I dragged him along for The Assassin's Revenge (he died), The Smell of Titan in the Morning (he died), Fire and Pain (he died)...etc. I also ran into everyone's favorite Elementalist boss, Borguus Blisterbark. He died again. So he should have around 60% DP right now. And I am pretty certain he does, because if I walk near one of the burning trees which sets you on fire, his health drops *rapidly*.

HE FOLLOWED ME AROUND WHEN i left Doomlore Shrine and watched me rape charr in dalada uplands. —♥Jedi♥Rogue♥ 14:49, 23 September 2007 (CDT)

Nothing new, he randomly joins you as an ally as mentioned in the article. Or did he only watch without fighting? That'd be new! — Perfectsam

Shouldn't the "appearance" section be modified to include it latter appearances in known areas? i'd imagine the pool of areas might be narrowed down to Dalada Uplands, or maybe the Ascalonian Vanguard areas of EotN...--76.28.229.121 11:52, 9 May 2009 (UTC)

Met him in Grothmar Wardowns to get his quest be very quiet(or whatever), and he says his favourite colour is sage green. Is that a reference to something or is just anet playing with this? ^^ --Rotfl Mao 16:26, 27 September 2007 (UTC)

Did he play Clarinet?

I think it is. That's what I think of everytime he says it...besides, I think eating a live beetle while drunk at a wedding qualifies as something likely to occur at band camp...or in Kaineng City... RebeccaTheLoving 00:46, 6 March 2008 (UTC)

Retrieved from "https://guildwars.fandom.com/wiki/Talk:Vael?oldid=1614766"
Community content is available under CC-BY-NC-SA unless otherwise noted.