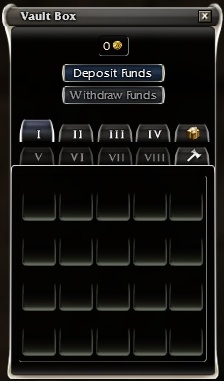 In game is best, I say, simply from the point of few that most gamers spend most their time looking at the game than official documentation (manuals, websites, etc) --Jamie

Ingame the items tab is called "Item Storage", but its shortend to "Items" as soon as you buy the access to the material part. I bet the "Materials" tab's full name is "Crafting Material Storage", if its possible to buy the access to it without the normal one. --Khan Reaper Kerensky 09:13, 14 July 2006 (CDT)

Is this the best name we could think of? *stumped* --Jamie

I would have prefered "money" or "gold", but chosed "funds" because that's the ingame term. The buttons read "Withdraw Funds" and "Deposit Funds". As for "vault", I picked that in order to have a uniform naming convention with the Items Vault and the Materials Vault. --

According to the scribe, storage will increase this weekend based on your explorer title tracks. It's about time! See the Scribe[1] for more information.--— xis10al

I don't think it is based on any title tracks, just the campaigns you have activated on your account. You get a new tab for each campaign you own.

I don't know, the line, "Veteran travelers who venture into every corner of the world will receive the greatest rewards," leads me to believe that it will be linked to your explorer title. Either way, it means atleast 60 spots in my vault...woot!--— xis10al

I'm just going to wait for people to start saying that this is just a ploy to get people to buy the other campaigns now and how unfair it is that you have to have all three in order to get all the storage... (You laugh, but it happened the last time storage was upgraded.) --Rainith 01:18, 5 April 2007 (CDT)

Ploy complaning happened last time because material storage had nothing to do with Factions/Cantha. Materials are found in all chapters, as are the storage people. It didn't make sence. This new method does make sence. I only hope you don't have to be in a certain chapter to access that chapters tab... otherwise it's going to be a lot of annoying map warping. I'm still hoping for the option to move multiple items at a time. --Mooseyfate 18:07, 5 April 2007 (CDT)

Oh sweet, I was getting tired of converting all my characters to Mules. I think we should get extra space for more Materials Storage too, 250 don't cut it anymore! And where is Weapon Mods storage, Rune Storage, Dye Storage...? I'm also wondering if Eye of the North will also count towards another storage box.

I'd say this is all we're going to get, but I think it's safe to assume that GW:EN will add another tab. I always figured Anet limited storage to encourage trade (even though the player trade system is probably GW's biggest failing...). And really, at least 20 and up to 60 more item slots is really nice. Plus, it'd be hard to create a simple system to store all the different runes, mods of varying quality, or the dozens of collectable drops. Anyway, now I won't have to store all my dyes on a mule and transfer them back all the time. =) Also, Mooseyfate, all tabs are always available no matter where the character is (at least for PVE, haven't tested a PVP char yet personally). The numbers probably don't even correspond to specific campaigns. — HarshLanguage

Can anyone tell me...

Italic textIf I puchase a Xunlai Agent (Storage) for my guild hall, will anything I collect as be interchangeable between my PvE and PvP characters?

The normal rules for customized items apply, as always. — HarshLanguage

04:08, 6 April 2007 (CDT)
Also, there are storage agents in the Great Temple of Balthazar and Random Arenas, among other places. So if you just want your PvP chars to access the storage, there is no need to put one in the Guild Hall except for convenience.

I just discovered this by accident, if you have a male PVE character and put his armor in storage, then make a female PVP character of the same profession and access the storage account, the armor stored there will appear to be female, the item icons will change from male armor to female armor. --Cassius

It's always been like that. The armour icons appear the same as the gender of the character you are logged in as.

You can also dye preview someone elses armor that same way :-) Just has to be same profession is all.

I just think that instead of having a separate article for storage updates that it should be merged into this or something... —The preceding unsigned comment was added by Faeless (contribs) . 20:32, 8 April 2007 (GMT)

"Even with the Vault Box's potential maximum of 80 items, more storage may be needed. The Vault Box is often used to move items to a "mule" character, which can store up to a 47 additional items (45 in inventory and 2 equipped)." ... well if you wanan be that picky about it you can get more than 47 if you get some heros on that mule (2 more items per hero you obther to pick up).

I'd say the basic notion of mules doesn't include them having heroes, but it's a moot point. Anyway, I don't mind the change. In my previous edit, I just wanted to get the previous number, 52, out of there, since clearly armor shouldn't count as something a mule can hold. — HarshLanguage

The article says:
This upgrade is available by paying an additional fee of 50 Gold (for each roleplaying character that wants access) to a Xunlai Representative. Once upgraded, it can be accessed via any Xunlai Agents. The materials storage will show up as a separate tab.
This needs to be updated now that Xunlai Representatives have been removed but I'm not sure what the exact process is to make the change myself.

Nevermind, I did it. Looks like it's the male ones you get the upgrade from.

Anyone else get this "bug"?

Ok, I only have prophecies and nightfall on my account, no factions, and no GW:EN. But I DO have the GW:EN preorder key, as I planned to get it, but cant yet.

Anyway, onto the bug. Back before GW:EN came out, I only had 3 slots(the 1 core slot and 2 for each game) as well as materials. Now, here I sit after the release of GW:EN, with the same exact keys I had before, and I have all four slots. 1 core tab, and 2 for Prophecies and Nightfall. And an extra one that I'm assuming I got through a bug when GW:EN was released. So, has anyone else got this? Also, I dont think its a bug they can really fix(aside from preventing it from happening again) because if I had stuff in my storage, then by removing that last tab, could cause me to lose items. And since I doubt I'm the only person who has this bug, I dont think they would do that. --Mwpeck 19:00, 17 October 2007 (UTC)

I wonder... once you and I get Factions, will we get a fifth storage slot? :) I have 1 core tab, plus tabs for Prophecies and Nightfall, and the Materials tab. I mysteriously got a tab "IV", and I think it happened upon the introduction of the Bonus Missions on November 29th. --Qrystal 00:16, 3 December 2007 (UTC)

I recently bought a GW platinum edition (prophecies + eotn) for a friend, but he didn't play with it so I asked to get it back as a storage account. I then realised that it has all 4 tabs open, but shouldn't it only have 3? My very old Factions collectors edition storage account only has 2 tabs just like it should. --

I also had Proph+NF and had the three tabs. I added GW:EN pre-order when I bought it with the game when it came out. No upgrade. I just added the GW:EN key when I finished NF last week, and now I have the IV tab.

"So-called special items available as bonuses from the purchase of Game of the Year, GW Platinum, or Trilogy may not be stored (unfortunately, the game does not offer an error message when you try — it just won't let you do it). "

You can actually place special weapons into the "vault box", equip them onto a hero, then whilst the hero is selected in the Inventory pane double click a weapon in the Xunlai chest. The /bonus weapon will be in the Xunlai chest and your hero will now have the weapon that was originally in the Xunlai box. You wont be able to move it within the box, but you can move it back to your inventory freely. Just random Guildwars information! Khazad Guard 10:30, 27 April 2009 (UTC)

In the overhaul I just performed, I greatly decreased the size of the "Notes" section, partly by integrating notes into the rest of the article (item transfer and 4th Anniv. notes), and partly by just removing irrelevant notes (male Xunlai Agents). The following note is not relevant to this article, although it may still be of interest. If anyone thinks it should be retained somewhere, feel free to copy it to a more appropriate article (possibly Hero).

This note I removed because it appears to no longer be true. My wife has the GotY edition on one of her accounts, and she is able to place the /bonus items into storage.

Retrieved from "https://guildwars.fandom.com/wiki/Talk:Vault_Box?oldid=1618258"
Community content is available under CC-BY-NC-SA unless otherwise noted.