Have you tested? It could mean that you get 1 energy per second...In which case, BAM, nerf. I suspect your right on the per strike

1 energy per hit, tested now. Basically makes 2 people in your party have zealous weapons with a slight adrenal boost. Too bad most of the time, it barely cuts more than 2 hits off a skill use :( Merengue 00:46, 28 October 2006 (CDT)

Mark of Fury, Dark Fury, For Great Justice, and Kapow 3x1.5=4.5 per hit. Destructive Chop every 3rd hit anyone? or Quivering Blade spam? Etc... Backbreaker spam! you could use Backbreaker for a perma kd chain! Of course Dark Fury IS pricy. But wow. Less in GvG/Ha xD xD! God's Chosen 21:51, 2 October 2006 (CDT)

The latest balance update capped adrenaline multipliers so that they can't more than double adrenaline gain, which means Weapon of Fury and For Great Justice only stack to double instead of ~230%. But Balthazar's Spirit, Dark Fury and Mark of Fury aren't multipliers, so they can all theoretically stack. -- Gordon Ecker 22:28, 3 October 2006 (CDT)

I removed the notes about adrenaline gain. Most of it can be calculated in your own head, it's not that difficult.

I was just looking at this skill, actually looks really sweet for pve. Compare this+IAS to battle rage... (attribute a feasible 10 for a 12+3+1-8+1-10 setup) 1.5*1.35=2.05 times as much adrenaline as standard auto attacking, versus battle rage's 2 times as much. And doing more damage in the process, and without losing everything every few seconds... and with up to an extra 3 pips of energy equivalent thrown in! I think I'm going to cap this skill... Phool 13:17, 16 January 2007 (CST)

somehow, I think its possible to fit this into a 55 build...does this remind anyone else of Balthazar's spirit????

I think maybe a 55 Duo Team could use this... a rit and a 55 axe warrior(if that exists =p) Cyclone Axe + This sounds pretty good to me with ancestors visage...

I capped this skill ans have been using it rather successfully in the PvE world. Most noticeable it helps in tombs b/p groups where it allows rangers to use barrage for free even with 0 in expertise (assuming they hit at least 4 targets). And the adrenaline gain was the saving grace for our tank in many of my FoW groups. This skill really is useful, and the kind of support spell that I;ve been looking for.

I was just going to ask about wither or not this works with mutli-hit skills and/or Scythes. Get a R/Rt with Volley and this and you can go to town :D Maybe a note should be added about this being very beneficial with mutli-hit skills. ZanderArch 11:38, 15 February 2008 (UTC)

does this also multiplies the adr gained by Dragon Slash 50% more? If so, that would be leet spammage. UnexistNL

I was just gonna see if anyone else saw that! Yes! Star Wars FTW!

I don't want to contribute to the discussion of this thing looks/is a lightsaber or not, but to point out that the only-revert-once policy GW:1RV isn't used here. In fact, looking at the history of this page, its been added and removed multiple times from the page. Please discuss it here and find a consensus *before* placing it back. --

Just because the sword is glowing, does not make it a lightsaber... it's just a glowing weapon. Silver Sunlight

I see a bit of a resemblence, but it could just be a generic glowy magic fantasy sword? Eh? PossessedLinebeck 22:10, 7 July 2008 (UTC)

Here is an internal link for you. 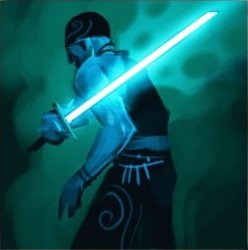 You could spam Critical Chop!

Retrieved from "https://guildwars.fandom.com/wiki/Talk:Weapon_of_Fury?oldid=1441960"
Community content is available under CC-BY-NC-SA unless otherwise noted.