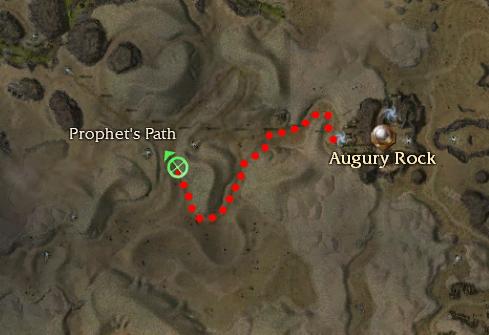 Augury Rock (mission)
Not being primary or secondary Elementalist

After completing this quest it will be possible to change your secondary profession to Elementalist.

"Others may be devoted to a single god, but the Elementalist seeks knowledge from any source. This is why we hold the power over all the elements. Knowledge, you see, is power.

The desert holds many secrets for those who would uncover them. Are you such a seeker of knowledge? Then let your journey begin in the Prophet's Path. Long ago, those lands were ruled by the Sorcerer Lord Kree, who controlled an army of beasts, their flesh inscribed with runes of power that only he understood. Even today, among the progeny of his ancient army are sometimes born those bearing the mark of Kree. Bring me the hide of one such kree minotaur and your quest for knowledge will truly begin."

"You will most likely find a kree minotaur in Prophet's Path. Kill the beast and bring me its hide."

"Yes, that is it! The pattern is faint and incomplete, but someday ...someday I shall gather the whole pattern and unlock the secrets of the Sorcerer lords of old.
Do you understand now? Power can be gained only through the pursuit of knowledge. If you are beginning to understand this in the least, perhaps you have a chance to become an Elementalist"

The closest place to start is from Augury Rock. The Kree Minotaur moves quickly throughout Prophet's Path, just like the regular Crystal Desert minotaurs do. So it is possible that he won't be at the spot marked on the map. If you see him in the distance, don't try to chase him if he is moving away from you. He moves too fast and might lead you into some nasty surprises, such as a pack of Hydras. Just wait for him there and he will return very soon. He is usually surrounded by a few minotour, but keeps running in a circle in front of them, so if you move carefully you are able to aggro only the Kree minotour.

Retrieved from "https://guildwars.fandom.com/wiki/The_Elementalist%27s_Path?oldid=1450111"
Community content is available under CC-BY-NC-SA unless otherwise noted.