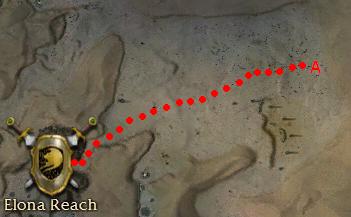 Augury Rock (mission)
Not being a primary or secondary Monk

After completing this quest it will be possible to change your secondary class to Monk.

"Many wander through their lives, neither committing to be good nor choosing to be evil. <Name>, have you considered the path of light? You could learn what it is to be a Monk, to be the bane of darkness.

In a place called Diviner's Ascent lives a foul demon, the Eater of Souls. Destroy this monster and set free those it has imprisoned within its belly. This will be your first step on the path of light."

I will destroy this demon!

This is not my affair.

"Travel through the Salt Flats to Diviner's Ascent. Then destroy the Eater of Souls."

"The destruction of the Eater of Souls will allow those it has consumed to finally find peace. With this act of selflessness, you have begun a journey to put behind you the darker aspects of yourself. Follow the goodness that is in your heart, and you may yet become a great monk."

Although the quest says to travel through the Salt Flats, starting from Destiny's Gorge or Elona Reach is quicker. Just avoid/fight the scattered groups of Sand Drakes until you reach marker on your map.

The Eater of Souls is a Jade Scarab boss that burrows underground when you come near. When you reach his location, four spawns of four Jade Scarabs will pop-up. It is best to pull the groups as they can overwhelm your group. If you're particularly unlucky, a Sand Wurm will also spawn in the area. When all the Jade Scarabs are dead, the Eater of Souls will reappear. Kill it to finish the quest.

Retrieved from "https://guildwars.fandom.com/wiki/The_Monk%27s_Path?oldid=1445111"
Community content is available under CC-BY-NC-SA unless otherwise noted.