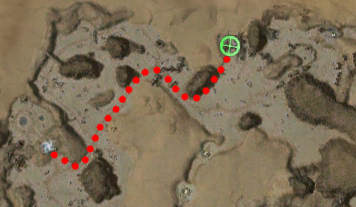 Augury Rock (mission)
Not being a primary or secondary Ranger

After completing this quest it will be possible to change your secondary profession to Ranger.

"As a follower of Melandru, I have a deep love and respect for nature. Indeed, all Rangers, even those who do not view our craft in a spiritual light, rely on the rule of nature to exercise their talents. That is why we have to abhor all that is unnatural and corrupt.

Ages ago, a power-mad mage named Sybitha unleashed the monstrous storm riders upon this land. One of her first and most powerful roams the Salt Flats to this very day, an ancient and corrupt creature the Centaurs call Yxthoshth. Do not be enticed by the path Sybitha followed. Destroy this foul beast and let us call you an ally and friend of nature."

"I will hunt down this creature."

"These ancient lands have witnessed the misdeeds of many who came here seeking power. All my life, I strove to undo the wickedness they unleashed, but one monster escaped me. Help me, and will I share with you Melandru's secrets. (sic) Go to the Salt Flats and destroy Yxthoshth!"

"The destruction of Yxthosnth has been long in coming. I tell you, (character name), I feel as though a great burden has been lifted from my shoulders, and even through the veil of death, I feel that I may once again appreciate the natural beauty of the world around me.

You have my gratitude, and I will gladly repay you if I can. Should you ever wish to learn what it is to be a Ranger, all you need to do is ask. I have no greater gift to give than that."

Start from Seeker's Passage. Follow the map and keep an eye out for the many groups of Storm Kin who float around and can quickly move from one point to another. There also are a few groups of Hydras around. The paths of many of the Storm Kin patrols intersect at Yxthoshth's location, which means that if they are not cleared out earlier, you are likely to end up fighting them at the same time as Yxthoshth and may become overwhelmed.

Another way to beat this quest is to approach from Elona Reach via the teleporters. There will be a seemingly blocked passage leading to the boss which you can sneak through. He is guarded by tons of Storm Kins, so you can either carefully kill the patrols of 3 as they come and go, or the quicker way, ambush him for the speed kill when the guards are all away. Kill him and map back quickly if you choose this method, because if the patrols return while you are fighting, you will likely wipe.

Tip: If you corner him into the sand dune the patrols will not see you, they will stop just short of your party. But that means everyone (including spellcasters) needs to be in that corner.

Retrieved from "https://guildwars.fandom.com/wiki/The_Ranger%27s_Path?oldid=1334612"
Community content is available under CC-BY-NC-SA unless otherwise noted.