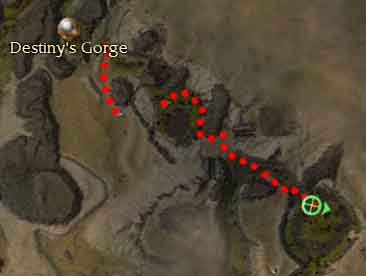 Agastos the Brave in Destiny's Gorge

Augury Rock (mission)
Not being a primary or secondary Warrior

After completing this quest it will be possible to change your secondary profession to Warrior.

"Balthazar himself would tell you there is no greater hero than a Warrior. A Warrior is feared by all who face him. A Warrior needs not hide behind prayers or trickery. A Warrior trusts in his own strength and skill. Do you wish to be such a hero? It is not too late. I can show you the way, but first you must prove you have a Warrior's courage. Most feared among the desert Centaurs are the man-eating Orshad Raiders who make their home in the Scar. Strike down the Orshad Chieftain, and I will believe you have the heart of a Warrior."

"I don't have to prove anything to you"

"You have faced the trial at Augury Rock. This means you are not a coward, but if you want to impress me, you'll need to defeat the Orshad Chieftain. You should be able to find him not far from here, in the Scar."

"There's no feeling like victory, is there? I hope you let at least one of the Orshad live so that he might carry tales of your prowess to the rest of his kind.
"You have shown both courage and skill. Let me know if you ever wish to learn the ways of the Warrior."

Exit Destiny's Gorge to the south-east and head south to the teleporter. Beware there are several groups of Hydras near it and you may be attacked while activating the teleporter if not cautious. The teleporter will bring you down into the valley to the east, where you will be "welcomed" by quite a number of centaurs. Follow the valley to the south-east until you come to a circular shaped wider part. In the middle you will find the Orshad Chieftain. He himself is not too strong and guarded only by two others, but there are several groups of centaurs patrolling around him so it's best to wait a bit and take out those patrols first.

It may also be feasible to approach this quest from Thirsty River. Go north-west to the teleporter that's in a narrow ravine; before you reach it, there will be area with lots of Jade Scarabs - don't go too quickly. Teleport to the area with Desert Griffons (it can be seen on the picture to the left of the circular valley), kill 2 or 3 solitary ones and sneak past the pack down to the grassy land where you find Orshad Chieftain. Take out the patrols first and then the group with the boss. This way it is manageable for one player with henchmen without greater difficulties.

Retrieved from "https://guildwars.fandom.com/wiki/The_Warrior%27s_Path?oldid=1334614"
Community content is available under CC-BY-NC-SA unless otherwise noted.