Treasure refers to a specific type of chest found only in Elona and which does not require a key to reveal its contents. When opened, treasure drops gold and items. Unlike key-locked chests, treasure does not respawn after rezoning, it is always located in the same spot, its yields are more predictable, and it can only be opened about once every 30 days.

Opening these do not count towards the Treasure Hunter title.

Opening a chest causes gold to be added directly to a character's inventory (the amount will be noted in the chat window). Treasure also drops either a jewel or an item of gold or purple rarity. The amount of gold and the item quality varies, depending on the explorable area in which it is located and the number of times the character has revealed its contents. Initial amounts vary from 500

If a character attempts to visit a treasure more often than once every 30 days, a "magical force" will prevent them from opening it until another 30 days have passed.

Assuming all drops are identified and sold to NPCs, the expected return for collecting all 12 treasures is as much as 30

for the first run, dropping by approximately a third in subsequent runs, down to a minimum of about 10

by the fourth visit. These values are decreased if the character finds lots of gems but can be increased by trading high-demand items (and salvaged components) to other players.

The exact mechanics of the diminishing returns are still not fully understood. Players have speculated endlessly without coming to any agreed-upon explanation. Most of the evidence is anecdotal and those who have conducted controlled tests have found exceptions to each.

There are three types of treasure:

The Do Not Touch treasures are guarded by several Immolated or Ruby Djinn, using Savannah Heat or Searing Flames. Be careful to stand back and spread your party out before activating these. 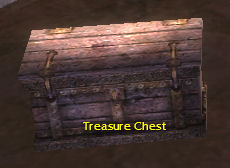 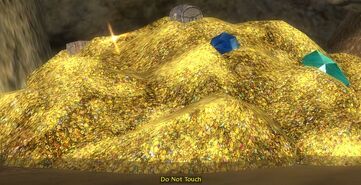 Do Not Touch
(Bahdok Caverns) 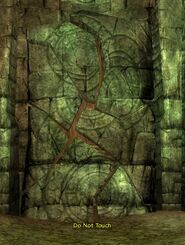 Do Not Touch
(Forum Highlands)
Add a photo to this gallery

Historical note: Previously, treasure in Elona was not subject to diminishing returns. It is not clear which update changed this.

Retrieved from "https://guildwars.fandom.com/wiki/Treasure?oldid=1609809"
Community content is available under CC-BY-NC-SA unless otherwise noted.