Dashface Megaritz is an Ascendant human Monk from Surmia whose most notable achievements include his masterful cartography of the Canthan continent and his seven thousand deaths, of which only one has been fatal.

After receiving a chilly reception while assisting Prince Rurik escort Ascalonian refugees across the Northern Shiverpeaks, Dashface administered an eye test on various Krytans and eventually saw through the Unseen Ones. He liberated the Scepter of Orr from the White Mantle and gave it to the rightful heir of all Orrian goods—an unimpressionable and trustworthy vizier named Khilbron.

Following his Ascension in the Crystal Desert, Dashface, and his associate, Puk Grum, harnessed a pantheonic gaze to search for a glimmer dragon's sandblasted pocket dimension. She directed the pair to put their healing, protection, hurting, and debilitation talents to use in the Southern Shiverpeaks. 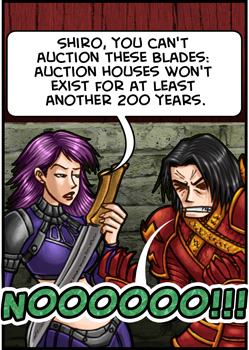 With collusion, Infusion, and extrusion, they and King Jalis Ironhammer fought off exclusion, intrusion, delusion, and a profusion of Stone Summit dwarves. Dashface fought many powerful enemies on his path to opening the Door of Komalie. With the door open, many complained that it was too breezy, so he closed it again. Dashface later travelled to Cantha, where he quickly developed a rapport with Master Togo and became Weh no Su, Closer to the Stars, and Adjacent to Several Foes. They had a falling out when the head of Shing Jea Monastery aided a disagreeable bodyguard named Shiro Tagachi with a plot return to the mortal world. Due to the bitter nature of their parting, Togo and Dashface have not spoken since. Dashface has spent some considerable time in Cantha, expanding his repertoire of elite skills and diminishing his repertoire of self-defenestration skills. He has learnt much from Mhenlo, a fellow Tyrian Monk that loves demonstrating how to put the P in NPC. 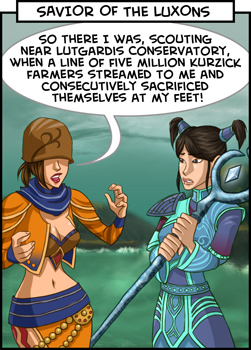 After endangering and subsequently rescuing two continents, Dashface thought that he was in luck when he received a personal invitation to luxurious Club Elona from a venerable Istani named Kormir. Though he had been 80...92% confident that nothing significant would befall the inhabitants of Elona, the invitation became a compulsion to join the Order of the Sunspears. The Sunspears—protectors of all Elona—needed help for the assault that they were planning on member-province Kourna.

Legendary Spearmarshal Kormir led the charge against Party Animal Varesh Ossa, but things went awry when Varesh unexpectedly defended her land using the very uncanny powers that justified the attack in the first place. Kormir was lost in that battle, and she never saw her allies again. Recognising the pattern, Dashface hopes to warn future non-core mentors about their nefarious non-core rivals.

After clearing out an infested cavern to use as their dimly-lit refuge from potential Nightfall, Dashface and Puk helped fellow Sunspears escape as far as possible from their new base of operations. Koss was even less useful than usual during this period.

Conquering hunger, thirst, and things unmentionable, the pair made their way to Vabbi: a land where rubies were the carpet, sapphires were the sky, and diamonds appeared to serve no purpose at all. After having yet another dinner party end in violence, Dashface took lodging at Dzagonur Bastion, where he bravely fought against invading Margonites and superfluous Zs. 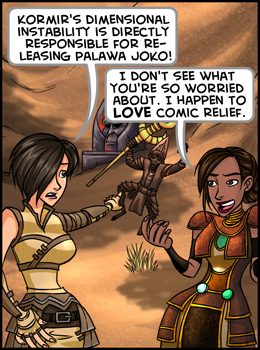 With beloved Kourna under a dreamland assault, Dashface took Melonni's advice and saved the town of Ronjok by giving the hamburgers a gentle dousing. Kormir, since rescued by Puk, suggested that the Sunspears hang out near Palawa Joko's headstone, and Dashface suspected nothing untoward until Kormir freed this ancient enemy from his centuries-old abode.

Helpful Centaurs tracked down PJ to coax from him the secrets of Junundu travelling and immaculate personal grooming. This led to Varesh, whose death caused the very ground to fall away, pulling Dashface into a realm horribly decorated by torment, pain, anguish, and purple. 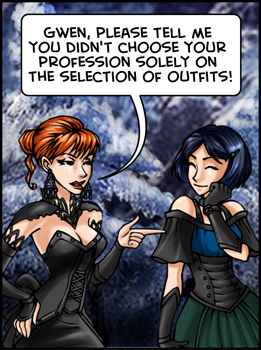 Dunkoro was reunited with his son, Sonkoro, who had wiped on a Tombs run—possibly because he didn't not have an Ursan Blessing. Dashface and Puk had a reunion of their own, getting into contact with two errant public servants from their past. This meeting was short-lived, as Dashface and Puk went through them to their superior, Abadong. Rising above the usefulness of her typical solo party-wide shouts, Kormir proved to be the ultimate Imbagon when she stepped into Abadong's shoes and became the Goddess of Spoilers.

Retrieved from "https://guildwars.fandom.com/wiki/User:Dashface?oldid=1467800"
Community content is available under CC-BY-NC-SA unless otherwise noted.