Let's see if I can finally get around to making a user page and some subpages and have stuff actually work.

I write up guides to various missions as I go, mostly focusing on the tactics to get through the hard parts of the missions. I don’t go into mind-numbing detail on the easy parts, and don’t mention stuff that would apply everywhere such as don’t charge into a bunch of groups at once.

Some prospective guides go into great length about character builds. With the exception of a handful of places where particular skills are needed, this is generally foolishness. A reasonably well-balanced group that doesn’t use flagrantly stupid builds will suffice for most of the game.

I also rank mission difficulty, nominally on a scale of 1 to 5 stars, with 5 being the hardest. For difficulty ratings in easy mode, I assume that heroes are used only in campaigns that give heroes, so that it is henchmen-only in Prophecies and Factions. For hard mode, I assume the availability of both heroes and henchmen. If getting master’s reward or the bonus (depending on the campaign) is substantially harder than merely completing the mission, I list separate difficulty ratings.

Furthermore, I assume that the group is at whatever level the henchmen are. Naturally, a full group of level 20 characters will breeze through a mission built for level 12s, but that doesn’t mean it’s an easy mission if you’re level 12. Augury Rock and Tihark Orchard are solo missions, so I assume the player is level 20.

I've also been doing some easy mode dungeons as they show up in Zaishen bounties.

Let's start with a general guide to hard mode. I'm now done with legendary guardian, so I'll list the hard mode missions sorted by difficulty. Just for fun, let's list some of my favored hero builds for hard mode missions, since I don't just copy them from other sources.

My main project for now is vanquishing. The difficulty ratings are difficulty of completing the vanquish without being sent back to town when you wipe at -60% death penalty. This is, of course, much easier than completing the vanquish without wiping, as would be necessary for a campaign mission. The difficulty ratings are on the same difficulty scale as the missions. As was my custom with missions, I'll add some information on a vanquish when perhaps half of my characters are through. Once all of my characters are through, I'll add statistics on the number of mobs they had to kill to vanquish the region. I assume all quests available involving a region are completed and turned in before starting the vanquish, except as noted otherwise.

I generally update a wiki page once I'm done with a mission to fix glaring tactical problems in it. I sometimes copy verbatim portions of what I've written for my guides, so this is the reason for any similarities. This doesn't mean many changes to the straightforward missions, but sometimes requires major changes in the case of more complicated missions.

My basic philosophy on mission walkthrough articles is that mandating this or that build is generally best avoided. In a lot of missions, pretty much any build that would seem reasonable to someone who has never tried the mission will work. In such cases, stating that this or that particular build happens to work is useless information. Only if one skill or a few particular skills happen to work far better than anything else is it worth mentioning. Usually it's not the build you bring, but rather, the strategy that you use. Understanding how to counter what the AI does and how to pull few enough mobs at a time to avoid being overwhelmed is critical.

Most notable are the changes to the Guide to defeating Magni the Bison, where the top half of that page (that is, the useful half) is essentially mine. I also completely rewrote the walkthrough sections for Dzagonur Bastion, Vizunah Square, and The Eternal Grove; the crystal attuning area of Aurora Glade; the bonus section of Dunes of Despair; the section on doing the mission and bonus in the same run in Sanctum Cay; and the portals and Shiro sections of Gate of Madness.

A few articles about the game that I either have written or am planning on writing:

There is no "Normal" Mode

The Proper Notion of Tanking

Why Skills Should be Linked to Classes

How to Fix the Game Economy

The Excessive (Ab)use of Acronyms

An Easy Game or a Hard Game?

The Absurdity of Guild Discounts

The End is Here

I also found an article I wrote at the time of Fall 2007's duping bug. It's a bit dated, but oh well.

Regarding the Duping Bug

Just because this is a user page, I'll list my characters. All good character names start with Q, except for the ones that don't.

If you can figure out why my Quintic Formula character got that name without looking it up, you win 5 bonus points.

And just because character names appearing in system messages is more interesting than in wiki text: 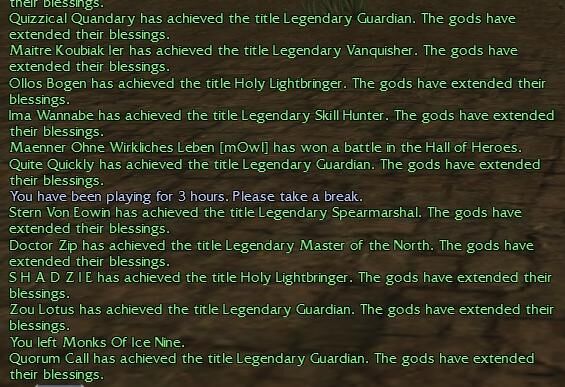 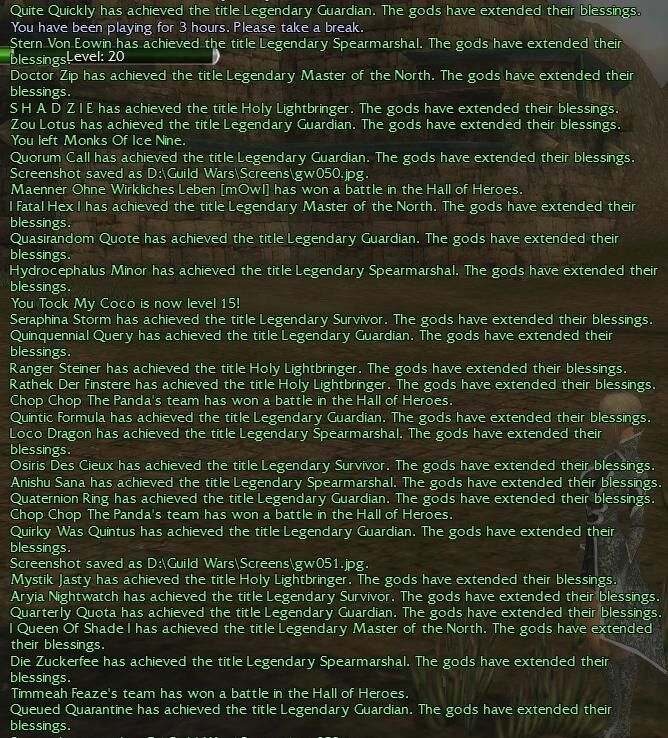 One easy way for me to add more articles to my wiki page is to post things I've written for other games. Unfortunately, most of them are about issues peculiar to games that are relatively obscure, and not many Guild Wars players would care to read about the intricacies of first telling cooking in ATITD, the need for software support for guild matches in Infantry, or the evils of crews trying to "steal" their greenies' labor in Puzzle Pirates.

I will take a shot, though, with my most famous essay, about WoW. I originally posted it on the WoW forums in March 2006. The thread mostly got replies of the form "too long, didn't read", and died. I tried breaking it up into six separate (and hence shorter) threads, and people complained that I was reposting it, and those threads died, too. I figured that was the end of the post.

Apparently someone saved the post, chopped off about the first ten paragraphs, removed all paragraph markers, and reposted it a few weeks later. Some people commented that the post had some good points, but should have used paragraphs. The mangled version got passed all around the Internet. You can still find it in many places today with a Google search for "Unless readily accessible new", at least if you click the option to repeat the search with the omitted results included. I think there is a statement here somewhere about the literacy of the average WoW player.

Some things in the post are peculiar to WoW, but enough are common to stereotypical MMORPGs that I expect that portions of the essay will remain relevant to online games long after Ashenvale and Stratholme are as forgotten as New Kasuto and Portoa. I was much less anti-WoW then, having not yet found Guild Wars, but did manage to skewer the game a good bit. I would end up quitting WoW not long after posting the essay. Here is the original essay, with the original paragraphing:

Community content is available under CC-BY-NC-SA unless otherwise noted.