Weapon spells behave like preparations: On any one player, only one weapon spell can be active at a time, and the only way to remove them before they run out is to cast another weapon spell. The main difference between preparations and weapon spells is that weapon spells are spells and that they typically can be cast upon any ally instead of only oneself.

A player may be under the effects of a weapon spell even when that player has no weapon equipped (such as when he/she is holding a flag or bundle or under the effects of an Item Spell). In this case, no special spirit weapon will be shown. This also applies to minions and pets, who do not use traditional weapons. For projectile weapons, a weapon spell's effects are checked when the projectile hits its target. 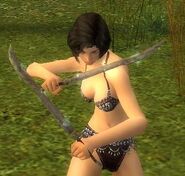 Spear under weapon spell
Add a photo to this gallery

Retrieved from "https://guildwars.fandom.com/wiki/Weapon_Spell?oldid=1598196"
Community content is available under CC-BY-NC-SA unless otherwise noted.